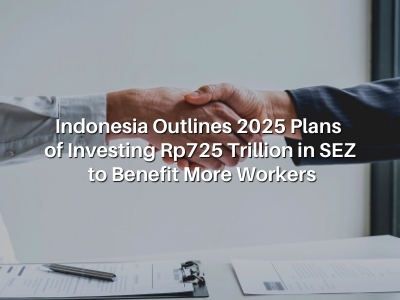 Indonesian President on November 2 has signed the Job Creation Bill, or referred to as the “omnibus law,” aiming to create quality employment and attract investors by reducing logistics costs. It was considered as a response to the economic impact caused by the COVID-19 pandemic.

In his statement on a virtual dialogue held by the World Economic Forum, with over 50 global business leaders and investors, the Indonesian job creation law would improve its legal certainties while primarily investing in climate progress.

The significant support from the business community was recognized as essential in implementation, considering it would enhance reclamation while balancing the government’s management practices.

Moreover, the commitment to public-private partnerships was reiterated as it would reinforce the country in establishing a “sustainable and resilient economic recovery” and resolution to the negative impact of the pandemic in terms of employment in Indonesia.

The job creation law would help create quality employment for 29.12 million unemployed people in Indonesia, as per the Coordinating Minister for Economic Affairs at an online discussion in Jakarta.

Remarking on the improvement of business climate and recovery of the economic disruptions, the Indonesian Job creation law was remarked as a ‘game-changer’ that will lead to surpassing standards in a long-term period. Moreover, it was also denoted that the bill would reduce the negative impact of increasing unemployed individuals since shutting down most business operations.

International institutions have welcomed the reform, and it increased the competitiveness of Indonesia in the market. Opening of clusters of jobs and the heightened environment is expected, while long-term protection for workers would be provided.

Despite the completion of the Indonesian Job creation law’s derivative regulations, the government is still open to public suggestions on its implementations. An aspiration team would be formed to work on the space for the next two months.

Indonesia may anticipate a simplified licensing process, less expense, legal certainty in transportation services, and the potentiality of bigger investments.

The law covers policies on the investing ecosystem and business activities. Protection and support of research are emphasized. However, some concerns were outspoken by some groups in the country as the law could have detrimental impacts on the environment due to the removal of environmental impact analysis requirements.

According to the speech of a lecturer at the Department of Political Science at the University of Indonesia in a report of AntaraNews, the provisions are not aimed at investors and business people who already complied with the international level of human rights, climate change, environmental preservation.

Widespread protests by environmental and indigenous groups were observed since the passing of the law, demonstrating that the changes in land regulations could increase emissions and series of deforestation.

Indonesia is renowned globally for having the third-largest tropical forest in the world, making it the country with one of the greatest biodiversity. It is also the nation of leaders in emissions from land-use.

In response to the clamour, the omnibus included provisions for the benefits and sustenance. This includes the removal of gasification for coal companies and the promotion of palm oil-based biofuels. Generally, the utilization of elements with little harm to the environment.