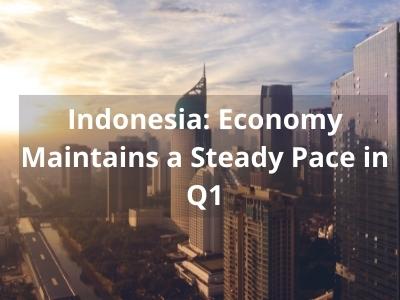 A momentous occasion for Indonesia – the country is experiencing steady economic growth for a straight quarter. The change, recorded from January to March, was contributed by the relaxation of COVID-19 restrictions and the rise in commodity prices.

Indonesia’s economy witnessed a 5.01% growth in last year’s January-March, a fourth straight quarter of expansion, compared to the October-December quadrant, which had a 5.02% growth. The numbers exceed Reuters analysts’ forecast, who expected a 5.00% growth in the first quadrant.

Consumption, investment, and exports are slowly but steadily picking up, supporting the country’s growth. Given Indonesia’s role as the primary supplier of various global commodities, the increasing prices for coal, palm oil and nickel, among others, played a big part in Indonesia achieving high trade surpluses. Southeast Asia’s biggest economy posted a $9.33 billion trade surplus in the first quarter alone. Making more than half of Indonesia’s GDP, consumption expanded from 3.55% in the fourth quarter to 4.34% in the first quarter.

According to Margo Yuwono, lead of Indonesia’s statistics bureau, the ascending increase in the economic activities and expenditure is significantly contributed to the relaxation of COVID-19 restrictions.

Although still higher than pre-pandemic levels, the employment rate had lowered in February 2022, which showed 5.83%, compared with 6.26%  in the previous year. Economists noted that the growth momentum is slowing down quarterly, which could be due to geopolitical concerns.

Interest Rates to Be Kept Low for Now

Previously stating that interest rate levels would only be revised in the third quarter, Bank Indonesia (BI) has now said that the interest rates would be kept at record lows. However, this is only until BI sees indications of core inflation pressure. Planning on normalizing monetary policy in the middle of the year, from May to June, BI also will assess any possible inflation-related risks if the government intends to change the energy prices and subsidies.

Bank Mandiri economist, Faisal Rachman, stated BI might be forced to raise its rates sooner than expected if the inflation gets out of hand and starts affecting the people’s purchasing power.

In the past month, Indonesia’s central bank has lowered its economic growth outlook for the year, to 4.5%-5.3%, from 4.7%-5.5% previously, citing slower global growth and disruptions to trade. Since 2017, the annual consumer prices have reached an all-time high in April, 3.47%, from the year before. The central bank targets keeping inflation from 2% to 4% in 2022.