Indonesia to Improve Agricultural Trade and Investment With UK 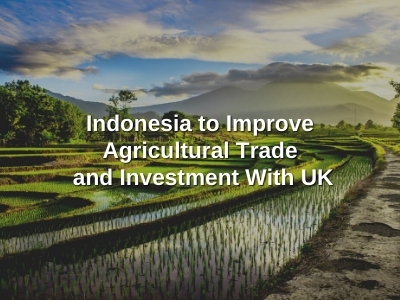 Both countries focus on solidarity and collaboration via transparency, inclusiveness, and international cooperation.

Indonesia’s Minister of Foreign Affairs and the UK’s Foreign Secretary have reached an agricultural trade and investment understanding. The two dignitaries met in Jakarta at the 3rd Indonesia – United Kingdom Partnership Forum on the 8th of April 2021.

As of 2020, the UK formed Indonesia’s fifth-biggest European trade alliance and its second-largest investor. The two countries had bilateral trade estimated at US$2.24 billion, and the UK’s investment had increased by 35%.

Both countries have reached a consensus on boosting economic recovery and maintaining stability in the Asia Pacific region. These objectives are to be achieved by improving collaboration in trade and investment between Indonesia and the UK. An underlying aim will also be about enhancing counterterrorism initiatives.

To that effect, Indonesia and the UK signed two memorandums of understanding (MOU). On the 7th of April, an MOU on Counterterrorism was signed. This is aimed at strengthening cooperation in the defense and security sector, including maritime security. This sector also includes peacekeeping as well as disaster response and humanitarian aid. The countries agreed to a Joint Defense Cooperation Dialogue in the very near future.

A second MOU, signed on the 26th of April 2021, established the Joint Economic and Trade Committee (JETCO). JETCO will focus on market barriers and foster bilateral trade. It will advance ten priority sectors such as agricultural commodities, renewable energy, timber, etc. JETCO will aim to accelerate the realization of both countries’ agricultural trade and investment opportunities.

The countries released a joint statement that reaffirmed their commitment towards sustainable trade based on mutuality. This would encompass respect and observation of both countries’ regulatory frameworks, including certification and standards. The UK’s proposed new legislation would place stringent due diligence on Indonesia’s agricultural commodities. It is the aim of both countries to jointly navigate complementary solutions that would benefit trade in both countries.

This is a positive outlook for the palm oil industry, Indonesia’s most significant export commodity. This industry had been under scrutiny for perceived environmental transgression such as deforestation. Indonesia stated that the UK had taken a more constructive outlook by acknowledging Indonesia’s successful environmental conservation efforts. In particular, the UK has lauded Indonesia’s efforts in reducing CO2 emissions, which has been internationally verified.

Both countries are exploring the viability of a PIB or Bilateral Investment Agreement, especially in the health sector. Indonesia’s Sovereign Wealth Fund (SWF) is a multibillion-dollar investment opportunity in the Southeast Asian economy. The SWF has already attracted the interests of countries such as the US, Canada, the UAE, Japan, and the Netherlands.

To explore more about investment and trade opportunities in Indonesia, contact 3E Accounting today. We are a comprehensive business solution firm with a strong global presence and network of alliances. We offer all-inclusive, end-to-end Indonesia company incorporation solutions that can be customized to your needs. Get in touch with 3E Accounting today for the best business solution packages in town.