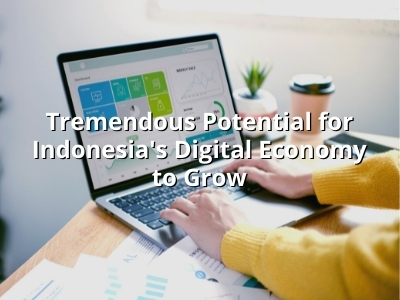 As of 2020, the Republic’s digital economic transactions approximate value was at Rp632 trillion. However, Indonesia’s Ministry of Trade firmly believes that its digital economy is poised for significant future growth. The Ministry cites the rapid rise of e-commerce during the pandemic as a driving factor for this expansion.

Despite its future expansion and potential for growth, quite a few fundamental challenges lay ahead for Indonesia’s digital economy. As an emerging economy, its ecosystem is still growing and needs more comprehensive and efficient strategies.

Indonesia still lacks comprehensive ICT infrastructure support such as the Internet of Things (IoT), Artificial Intelligence (AI), and especially 5G connectivity. There is also a scarcity of local digital talents as training and education in this sector is inadequate. However, the Government is currently working out policies and initiatives to address these issues. Strategies such as coding schools, ICT supportive infrastructure, etc., will provide solutions in addressing these pressing concerns.

The Ministry is confident that digital adoption is the key to higher gross domestic product (GDP) growth. The digital economy’s 4% GDP contribution in 2020 can expand exponentially from Rp15,400 trillion to Rp24,000 trillion by 2030. As such, Indonesia’s digital arena needs vital strategies and initiatives to secure these estimates. The Government and relevant stakeholders all need to play a crucial role in meeting these challenges head-on.

While e-commerce and the digital economy will be leading the growth trend, other sectors are forecast to follow suit rapidly. Indonesia’s travel industry, for instance, is looking at reaching Rp575 trillion as tourism resumes in the near future. The Government is also focusing its efforts on mega-tourism projects such as West Papua’s Manokwari, etc.

Digital media and entertainment, as well as ride e-hailing and online transportation, are also on a meteoric rise. The sectors are forecast to reach Rp191 trillion and Rp401 trillion, respectively. Also making waves in the fintech or digital finance industry with its Rp224 trillion forecast.

As Indonesia’s digital economy races towards exceptional growth, the time is right for entrepreneurs to join this bandwagon of success. 3E Accounting offers world-class business solution packages for anyone looking to start an Indonesian company. All our solutions are comprehensive, customizable, and fully digitalized to provide a seamless experience. Contact us today for the best in 21st-century business solutions.