What is Ascension Day of Jesus Christ in Indonesia All About? 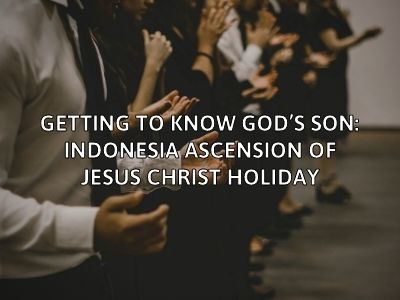 On Ascension Day, Jesus went up to Mount Olive while leading His disciples. That is when He said that it is time for Him to go back to God.

The celebration of the ascension happens 40 days after Easter Sunday, which is the sixth Thursday after Easter. This day is also known as Holy Thursday. Since Easter changes every year, this also changes.
In the forty days before Jesus ascended to enter heaven, Christians believe that he spent his time preaching and mingling with his disciples and apostles.

Today, it is mostly the Catholics and Anglican Christians that celebrate Jesus’ ascension. Based on how the Western Christianity calculates dates of Easter, the earliest date for Ascension Day is April 30 and the latest is June 3.

Based on the bible’s new testament, Jesus Christ went through five important stages in his lifetime. The ascension is the last stage. Before the ascension, there is baptism, his transfiguration, crucifixion, and resurrection. The bible has proclaimed that Jesus came back to life after he was crucified by the Romans. Jesus Christ spoke to his disciples and then ascended into heaven. He spoke about God’s teachings. When he ascended, 11 of his apostles were there to witness it.

Even if Christians are a minority in Indonesia, Hari Kenaikan Isa Almasih is honoured in the entire country. The extent of the celebrations in Indonesia will depend on the population of Christians that are in each city.

The most traditional and usual way of celebrating Jesus’ Ascension is by going to church. Many Christians in Indonesia celebrate this day like the Christians in Europe. They pray and have discussions about this day in church to give positivity and inspiration to the people.

In Java island, there is a small town called Kediri where the Ascension Day of Jesus is observed. They have a Mary Lourdes Grotto or the locals know it as Puh Sarang cave. The cave has a couple of places where you can visit and pray, with the statue of the Virgin Mary and they have 12 water fountains that represent the 12 disciples. They have statues around that demonstrate Jesus’ sacrifice on the cross.

If you want to explore eastern Indonesia, you can go to Bukit Doa Pinaling in Manado because it is excellent to go there. The site of this religion has 14 places where you can pray, and right behind it is a breath-taking waterfall. You will find a peaceful hill where you can pray, and it is in a serene village that will enhance the religious experience you have been looking forward to.

How Ascension Day of Jesus Christ in Indonesia is Celebrated

Ascension Day is popularly known as the Feast of Ascension and it is an important Christian festival that is celebrated around the world. It is marked as Jesus’ last appearance to his disciples and apostles after he resurrected in Easter.

For the Christians living in Indonesia, this day has always been given great importance. It is at the end of the Easter season and it is a preparation for the celebration of Pentecost. To show their interpretation of the verse, which says that Jesus’ disciples constantly prayed after Jesus ascended into heaven, a lot of Indonesian churches have a ten-day prayer meeting on the evenings of Ascension.
The truth is, churches all around the world made Ascension Day a special day of prayer so that congregations will have help in preparing for the Pentecost.

After ten days, Pentecost is celebrated and it is a commemoration of when the Holy Spirit came to the disciples. Pentecost is going to end the Easter cycle that relates to events in the Christian calendar.
During the 40 days after Jesus resurrected, he appeared to his disciples and promised to give them the gift of the holy spirit. After that, Jesus went to heaven and claimed his seat as God’s right hand.

If you want to attend special events in Indonesia, there are different places that commemorate it. You can go to the Northern part of Sumatra island. The Our Lady of Good Health Church is there, and it is a great destination to go if you want to celebrate and observe the Ascension of Jesus. The church’s design looks similar to a Buddhist temple and it looks very unique. The church has become a significant part of pilgrimages in Indonesia and it is found at Jalan Sakura III No. 7, Medan.

Aside from attending mass, visiting religious rites is a great way to strengthen and deepen your faith.

Visit Indonesia and check out the Indonesia Public Holiday calendar to have a unique experience of celebrating the Ascension of Jesus.