What is Prophet Muhammad’s Birthday in Indonesia All About? 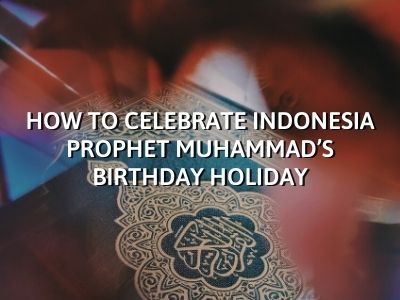 Prophet Muhammad’s birthday is also known as Mawlid, and its celebration falls on Rabiulawal, which is the Muslim calendar’s 3rd month.

Muhammad was originally from Mecca, which is a city in Arabia and he was born in 570 CE. He had a quiet childhood and his mother passed away due to an illness in 576 CE. After his mother died, his uncle took care of him. His name was Abu Talib, and Muhammad stayed with him until he was an adult.

The ‘Milad un Nabi’ is observed on a public holiday by countries that have a large population of Muslims because it commemorates Islam’s birth anniversary and when the Qur’an was proclaimed.

The prophet’s birthday, and it is one of the largest celebrations of the Islam religion. The Muslims worldwide is more than 1 billion, and the major populations are in the Middle East, Central Asia, Turkey, South Asia, and the Northern and sub-Saharan part of Africa.

The joyful yet low-key celebration of the Prophet’s birthday is a day that Muslims look forward to. Prophet Muhammad was born on August 20, 570 CE in Mecca. He was a trader and shepherd who started receiving messages from God when he turned 40 years old. Over the course of 23 years, he was able to establish Islam and brought a great degree of harmony and unity to the Arabs. That is why his birth became one of the most important events in the history of Islam.

Over time, the celebrations grew larger and larger. The biggest celebrations are normally in the Middle East. The very first-time major celebrations were in Iraq, and they happened in 1207. During that time, they wanted the streets to have lamps and large silk cloths as its decorations. They also did charity by money, clothes, and presents to poor people, government workers, and soldiers.

Today, it has become a public holiday in over forty countries. The Muslims are together in groups to celebrate Prophet Muhammad’s birthday. They honour it in different ways which reflects their culture, heritage, traditions, and local customs.

In the Islamic world, Muhammad’s birthday celebration is done by reciting verses and giving religious lectures in mosques which they decorate with lights for the occasion.

The earliest observance of the Mawlid dates back to the eighth century when Prophet Muhammad was born, and he started praying a lot. He was taught by Al-Khayzuran, the mom of Harun-al-Rashid, a caliph.

If you want to experience the celebration, there are a few things you can do. Some Muslims give gifts. Some families mostly honour the day by quietly sitting at home and give hazelnut candy, pistachio, and peanuts to their neighbours. The children are given candy dolls made from moulded molten sugar. The girls receive figures, and the boys normally receive a male figurine riding a horse. Part of Mawlid al-Nabi is to give gifts to the poor.

Muslims can also celebrate Prophet Muhammad’s birth publicly by having large processions and singing their hymns. There could also be a celebration in a public area, where Muslims put up decorations.

How Prophet Muhammad’s Birthday in Indonesia is Celebrated

Even during modern times, Prophet Muhammad’s birthday is still very traditional in all regions of Indonesia. Each of them has their own way of celebrating it. For instance, in Aceh, every region cooks its traditional lemang. The lemang is made from coconut milk and sticky rice, which generally takes four hours to cook.

Those who live in Banten, they celebrate this day through a Panjang Mulud. It is when they give out staple foods in their community. A unique Panjang Mulud feature is the staple foods placed on a wooden frame, and they decorate it like a boat. Naturally, the procession attracts residents and tourists. A lot of people come to Banten for it because it only happens once a year.

A primary feature of this celebration is reciting litanies or long poems that show gratitude to God and Muhammad, and give praise to the prophet. By practising this, they raise a special poetry genre.
As years went by, devotees and gifted poets have written poems about praising Prophet Muhammad. The poems can be recited or read during the prophet’s birthday.

It took four centuries after Muhammad passed away before public celebrations started to happen. The oldest Mawlid-text could be from the 12th century and it originated in Turkey.

An important part of this celebration is feasting. Muslims from different regions prepare their special foods to honour his birthday. For instance, in Egypt, people like to make hummus, candy dolls, and special sweets. Kenyans like to celebrate with shrimp pilaf, cassava with coconut sauce, curried eggplant, roasted red pepper, and mango chutney. Different regions have their own dishes to prepare for this special day.

In East Java, Pacitan, the main course is for celebrating this day and they called it nasi suci ulam. The dish is nasi uduk, and a free-range chicken. Each family head must bring it, and donate it to large mosques, and the homes of community elders.

In South Sulawesi, Cikoang, the Maulid tradition is known as Maudu Lompoa where they decorate the fishermen’s’ boats. When this day comes, the Cikoang people wear traditional costumes and have a procession while carrying a wooden rack. They hang ornaments, which are called julung-julung, and they offer chicken, decorated eggs, glutinous rice, parboiled, traditional Sulawesi fabrics, praying cloths, and more decorations. They place the julung-julung on a boat and decorate it with beautiful fabrics. When the eggs and other items are taken in the julung, that is the most spiritual part.

Indonesia celebrates the birthday of Prophet Muhammad as a public holiday in a beautiful way, and everyone unites to praise and honour his work in spreading Islam to the world.