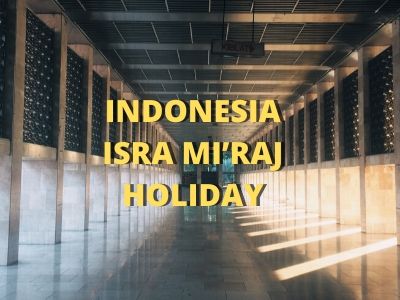 Isra Mi’raj is the celebration of Prophet Muhammad’s journey to heaven. He entered haven after meeting Gabriel while in Mecca. It happened in a cave, and he agreed to God’s wishes to spread the religion of Islam, so the world will know about it.

Based on the Quran, Muhammad left the Holy Masjid in Mecca and went to Masjid al-Aqsa in Jerusalem. From there, Gabriel was his guide to enter God’s kingdom and the heavens.

This day is celebrated during Rajaab, on its 27th day, and there are activities in Indonesia for the Muslim community to enjoy. Indonesia is a Muslim country, which is also one of the reasons why they look forward to this day and make sure to take part in the celebrations across the country.

If you are curious about this holiday and you plan to be in Indonesia on that day, you can read more about it here.

What is Isra Mi’raj in Indonesia All About?

The celebration of Isra Mi’raj started in the 14th century when Gorontalo first welcomed Islam. During that time, they celebrated the holiday by giving sermons about Muhammad’s journey. When the colonial era came, the Dutch opposed this tradition. They began celebrating this day by chanting religious songs about Muhammad’s journey and writing poems using Pegon letters. Up to this day, Indonesia still preserves this tradition, and it has become a custom to them.

After Muhammad met the prophets in every level of heaven and saw many wonders around him, he travelled to the seventh heaven. It is from there when he rose to reach Paradise. In Paradise, there are wonders of heaven that had increased in terms of quantity and scale.

Eventually, Muhammad was at the throne of God. It was there when he was formally ordered by God to start the Islam religion. God made a promise that Muslims who followed him will receive rewards from Paradise. Muhammad then went back to Earth, so he can accomplish his mission and become the founder of Islam.

There was a buraq who carried Muhammad from Mecca to Jerusalem, and it was described to be a white animal. It is called binatang in Indonesia, which is between the size of a donkey and a mule. Most of the time, Buraq is considered as a white-winged horse that has the face of a woman.

If you want to go on holiday, you can have a vacation of two days before or after the day. At least you can have a holiday of five days, which you can spend travelling in the country or even abroad.

There are cities in Indonesia have a unique way of celebrating Isra Mi’raj. That is why you must schedule an extended holiday if you want to enjoy everything Indonesia has to offer during this time. Plan your vacation by checking further information here.

Lombok island has a similar tradition called Ngaji Kayat. There are thousands of people that go to mosques to join the traditional recitation of Muhammad’s journey. During this night, they have a ritual of cutting the hair of newborns to 1-year-olds hoping to earn the blessing of Allah. The Ngaji Kayat still happens because there are a lot of common people who cannot read the chronicles on their own.

How Isra Mi’raj is Celebrated in Indonesia

Indonesia is known for being a populous country with the most Muslims in the world. That is why the people here are earnest about Isra Mi’raj. For instance, Cirebon celebrates it by doing the Rajaban, which is a pilgrimage going to Plangon site. It is there where two Islam propagators are buried, and they are both historical. Other traditions are reciting the Qu’ran at the Keraton Kasepuhan, which Ciberon’s local palace.

Aside from the unique Cirebon tradition, there is the Kampung Bukit in Bangka Belitung that only has one culture. They call this tradition ‘nanggung’. It consists of food distribution to neighbours placed in a hamper, cookie baskets, and local fruits. Aside from that, the people who reside in South Bangka commonly practice nanggung.

Central Java has the Ambengan tradition, which means sharing a meal. The community will gather together and recite the Quran. They will eat again together to show gratitude. It is not just about having food because people are eating rice with the dishes laid out on a banana leaf. They will enjoy this meal together.

Unlike other cities, Isra Mi’raj is commemorated in Yogyakarta differently. The servants of the palace make a huge offering that will consist of fruits and also buraq birds that are made using orange peel to symbolize Prophet Muhammad’s vehicle. After that, the gunungan will be driven from the palace towards the Gede Kauman mosque, and then it will be distributed to the event attendees after the event.

In the Rajaban tradition, they recite the chronicle of Isra Mi’raj, and they hold it at Langgar Alit, or sometimes at The Small Mosque of Kanoman Palace. The royal family, courtiers, and the locals attend the event. They start the procession by walking with four oil lamps and the Isra Mi’raj chronicle laying on a cushion. It is the courier in traditional Gegesik costume who carries these items. It is the Sultan who leads the recitation.

Isra Mi’raj is also celebrated in border areas, and they have their own tradition known as ‘Kerja Tuhan’, or it means God’s work. It is here where people must hold a harvest party to show grace for receiving God’s blessings. There are different times for this celebration in every village, and the village head decides it.

Solo has a Kirab Carnival and those who participate go to the Muslim communities and the boarding schools. They walk in the city going to the city hall while chanting the Salawat accompanied by a tambourine. Everyone here is enthusiastic about the event, which will be continued by the celebration of Isra Mi’raj.

You can witness this traditional celebration if you go to Indonesia during Isra Mi’raj.