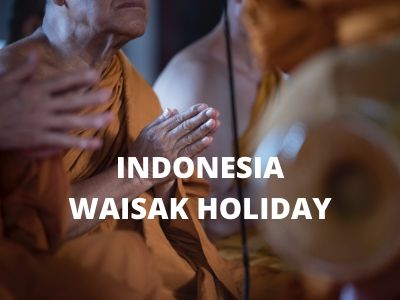 The Buddhist population in Indonesia is only 1%, but Waisak or Vesak is a public holiday because everyone wants to take part in the celebration. Waisak is extremely important for Buddhists because they commemorate the birth, death, and enlightenment of Buddha. It is observed when a full moon occurs in May or June.

The Waisak festivities start in central Java with a procession in the evening. It comes from the Mendut temple, passing through Pawon before it finishes at Borobodur where the biggest Buddhist complex in the world is found.

Experiencing Waisak in Indonesia is different because it has a touch of culture that cannot be found anywhere else in the world.

The celebrations are done safely and peacefully because there are security police personnel assigned in different areas to make sure peace and order are always there. The Buddhist temples will be packed, and some will participate in various activities.

What is the Waisak Day in Indonesia All About?

In the past, Buddhism reigned Indonesia, and you do not need to look further if you want to find a Buddhist kingdom. You will find the Borobudur Temple in Central Java. It was built during the 19th century, and it is the largest Buddhist temple in the world. A lot of pilgrims go there every year to join the celebration. Some monks and worshippers go there every year to take part in the ceremony.

Before the holiday, people prepare their homes by cleaning and decorating them. The temples will have beautiful flower decorations. When Waisak arrives at the temple, Buddhists come to visit. They will give offerings, flowers, and candles to the chanting monks. At the height of the full moon, the monk congregation will go around the main stupa to show honour to the three jewels of Buddhism. These are Buddha, his teachings, and monkhood.

These monks will pray and preach lessons to their visitors. The “bathing the Buddha” is a special ceremony that also takes place during this time. The ritual is that people pour water on Buddha to honour and respect his teachings, and it is also a symbol of new beginnings.

When the ritual is coming to an end, they will release thousands of lanterns into the sky.

How Waisak Day in Indonesia is Celebrated

The Waisak specific day of celebration in Indonesia follows the Hindu calendar, and it happens on a full moon in the fourth month of the Hindu calendar. That is why the majority of celebrations are in May based on the Gregorian Calendar. This has arrived since then, based on the Buddhist religion, the death of Buddha happened on a full moon during the fourth month of the lunar calendar.

During the celebrations, the devout locals and even foreigners who follow the Buddhist teachings usually gather in different temples when the dawn comes. After that, the Buddhist flag is raised together with placing offerings at the Buddha statues.

The most famous place where Waisak is celebrated is at Borobudur, which is a prominent Buddhist temple where the elaborate Waisak Day Festival is held. Every year, a lot of Buddhists from all over Indonesia go to Borobudur for a pilgrimage. People may come to Borobudur to watch the temple monks gather to celebrate and meditate.

They form large circles and start chanting mantras. To honour them, you must give a small donation of money or food on this day. Non-Buddhist visitors are also welcome here.

Venues and Special Events for Celebrating Waisak Day in Indonesia

If you are planning to join the Waisak Holiday celebration in Indonesia, make sure to remember everything you have read here to know what to expect. Also, you will know what to bring and what to prepare if you want to join the festivities so you will not miss out.