Doing Business in Indonesia VS Australia 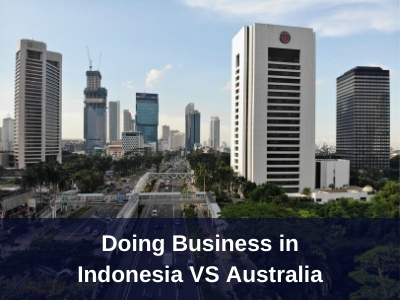 Investing money to set up your business in a foreign country is a massive undertaking. It requires a lot of research and months of strategic planning before diving into creating a company. You would have to consider a lot of things, including the demographics, major industries, and the labour market of a country. Accordingly, all these factors can help you decide if you should pursue your investment plans.

Both Indonesia and Australia are positioning to be an attractive investment destination. Take a look at their key economic indicators so you can decide for yourself.

The country has a population of over 260 million individuals, making it the fourth-largest country in terms of population size. In Indonesia, there is a variety of ethnic groups and cultures. But a significant portion of the population—over a half—is classified under two main ethnic groups. These are Javanese and Sundanese, who comprise 41 per cent and 15 per cent, respectively, of the population.

As of the latest data, Australia has a population of over 25.65 million individuals. It has a quarterly growth of 113,900 people or 0.4 per cent. Annually, the population grows by 357,000 individuals or 1.4 per cent. Majority or 61.8 per cent of the population growth in Australia as a result of overseas migration. The remaining 38.2 per cent was because of natural increase.
According to the Australian Bureau of Statistics, the country’s population is expected to grow between 1.4 per cent to 1.8 per cent on average yearly until June 2027. The Australian population could also reach as much as 29.3 million and 49.2 million people by 2027 and 2066, respectively, the national statistician claimed.

Dominant Industries in the Country: Indonesia VS Australia

This Asian country is offering a wide range of potential sectors where you can invest your money. Among its major industrial sectors are petroleum and natural gas, textiles and apparel, mining, footwear, rubber, chemical fertilizer, and plywood. The services sector is also a major segment, accounting for 43 per cent of the country’s gross domestic products in 2015.

Meanwhile, agriculture took 14 per cent of the contribution pie. The growth of the industrial sector was supported by government incentives and foreign direct investments. Tourism is also considered an important revenue source in the country. However, with the coronavirus pandemic plaguing the world, it is currently in a halt.

The country continent has a thriving service, tourism, healthcare, media and entertainment, and finance industries. Covering 70 per cent of the gross domestic products, the service industry employs 79 per cent of the workforce across different fields. Australia is among the top travel destinations in the world, recording over 7 million visitors in 2017.

Having been recognized as the second-best healthcare system in the world, Australia is the place to be for clinical trials. The media and entertainment are generating revenues from direct output and online platforms, including advertising. Lastly, the financial industry of Australia is one of the most sophisticatedly modern.

The situation of Labor Market: Indonesia VS Australia

In Indonesia, the majority or nearly half of the employment is in the services sector. It is followed by agriculture and industry at 27.7 per cent and 22.7 per cent, respectively. The young population of Indonesia has a labour force of 133.4 million people. The country is now being nudged to shift to digital, affecting the skill set needed for the labour market in effect.

According to research by McKinsey and Company, the manufacturing sector would benefit the most from digitization, projecting an increase of $34 billion in potential revenues. This is followed by retail and transportation sectors at $25 billion and $16 billion, respectively, the research said.

In 2019, the Australian employment had been growing at an average of 22,200 individuals per month. This translated to annual employment growth of 2.1 per cent. The workforce participation rate in Australia soared throughout 2019, peaking in August at 66.1 per cent for those aged 15 and over. The workforce participation rate is defined as the portion of the working-age Australians who are employed or job hunting.

Meanwhile, women’s participation in employment has been increasing in all age groups since 2014, specifically among those in 35-44, 55-59, and 60-64. A moderate participation growth for men among most age groups was recorded. In 2019, the services sector supported the Australian labour market. Among these are services in professional, scientific, and technical; education and training; administrative and support; healthcare and social assistance; accommodation and food; construction; and financial and insurance.

Summarizing the Indonesia VS Australia Comparison

Indonesia has far more population compared to Australia. However, both countries are showing an increasing trend in the future. Having a big and young population is beneficial for investors because it means the country has a massive market potential for various products and services. Meanwhile, both countries are offering different investment prospects because they have thriving sectors, thanks to the continued pursuit of excellence in various fields.

Meanwhile, the labour market in both countries is heavily invested in the services sector given the job opportunities in different segments. Indonesia and Australia are also keeping a healthy employment rate.

Professional Team for Your Accounting Needs

Accounting is one of the fundamental aspects of every business. Hence, it helps the company know its current financial position. Why? Accounting is the process of recording, summarizing, interpreting, and reporting of financial transactions a company or an organization accomplishes.

If you are looking for help in setting up an accounting system in Indonesia, reach out to 3E Accounting. Of course, we can help in looking over your finances and bookkeeping. You are in good hands with our team of excellent accounting professionals. Contact us today.