Doing Business in Indonesia VS Austria

Indonesia Vs Austria? Let Us Look at Their Key Economic Indicators 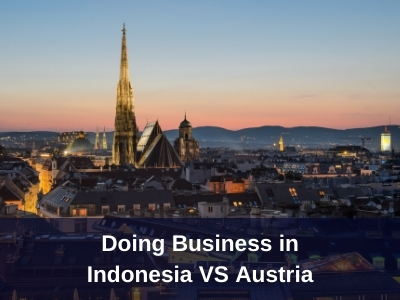 When setting up a business, you might consider looking into Indonesia and Austria. While both are a promising investment hub, Indonesia and Austria are offering their own exclusive perks. This makes both countries attractive to both local and foreign investors. Let us take a look at their key economic indicators to know more.

The country has been growing at an average of 5 per cent annually in recent years, according to data from Statistics Indonesia (BPS). In an interview, BPS Head Suhariyanto said that achieving the 5-per cent level growth was considered a triumph because the global economy was in a slump in 2019. The Indonesian economy was able to hurdle the impact of the trade tensions between the United States and China.

Looking at the contributing factors, Suhariyanto said that the 2019 economic growth was supported by robust household spending. This segment grew by 5.04 per cent in 2019 despite the decline in vehicle sales. In addition, investments—which is the second biggest contributor to economic growth—rose by 4.45 per cent. Meanwhile, government spending expanded by 3.25 per cent in 2019 as well.

The Indonesian government is continuing its efforts in making the country the best place to do business. With this, Indonesia is in the process of enacting a bill that will boost both job opportunities and foreign investments. It is called the Omnibus Law on Job Creation. At the same time, the bill is also aimed at making the labour market more flexible and improving the country’s international competitiveness, among others. According to Fitch Ratings, these reforms will put Indonesia in the spotlight amid the changes in global manufacturing supply chains.

Currently, Indonesia stood at 73rd out of 190 countries in the ranking of the World Bank’s Ease of Doing Business report.

Austria is a very convenient place for investors, both foreign and local, to build their businesses or regional operations. According to the World Bank’s Ease of Doing Business report, the country placed at the upper-tier with 27th rank out of 190 economies. It is the top country when it comes to trading across borders. Austria received a perfect score in the “time to export” and “cost to export” categories across border compliance and documentary compliance.

The Indonesian government is allowing a tax reduction of up to 50 per cent for companies with annual gross revenue of less than IDR 50 billion. In addition, the corporate taxpayers whose revenues are below IDR 4.8 billion per year can also be given such a benefit under certain circumstances.

Meanwhile, corporations listed on the Indonesian stock exchange can avail corporate income tax reduction of 5 per cent, should they meet the requirements. The corporate tax rate in Indonesia stands at 25 per cent. The taxation is determined based on the residency and source of income. Therefore, a company incorporated or situated in Indonesia is deemed an Indonesian tax resident.

The standard corporate income tax rate in Austria is 25 per cent. Meanwhile, the profit distributions at the shareholder level are taxable at 25 per cent for corporations and 27.5 per cent for other recipients. Limited liability corporations and stock corporations have unlimited taxation in the country of their whole source of income if their management is legally situated in Austria. The income covers both domestic and foreign revenue channels.

Meanwhile, a non-Austrian corporate tax resident is subject to limited taxation, as mandated by the law, on some sources of revenues in the country. Austria’s corporate income tax is among the lowest in Europe.

Summarizing the Indonesia VS Austria Comparison

Both countries are showing a very promising future for local and foreign investors. Indonesia and Austria are showing continued economic growth, supported by the household or private spending, although the former was able to grow quicker. Still, both countries were able to finish 2019 strong and with upbeat growth stories.

In terms of ease of doing business, both are proactive in improving this segment. Indonesia is pushing a bill to make it’s business climate more accommodating in a bid to attract more foreign investments. Meanwhile, Austria is among the most business-friendly countries in the world right now.

Further, Indonesia and Austria both have a corporate income tax rate of 25 per cent.

Professional Help to Incorporate Your Company

Incorporating a company is no easy task. You might need professional help in doing so. This process includes a lot of knowledge in the business field. You will need someone who can help you in every step of the way.

3E Accounting is here to help you if you need help in Indonesia company incorporation services. We understand you and your company needs. We are also offering services in corporate secretarial, accounting, taxation, human resources, and legal, among others. Our team is equipped with the best skills and expertise. Contact us today.