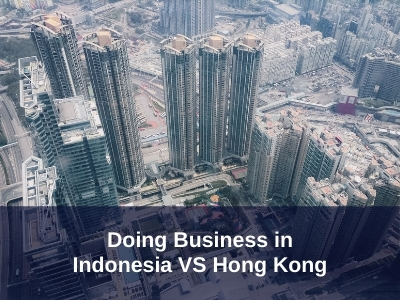 Indonesia is projected to become an economic giant in the future, and it is Southeast Asia’s largest economy. It is seventh in the world based on purchasing power parity. The country has not experienced negative GDP growth for more than a decade. Its growth already stabilized a 5% range over recent years, which decreased from 5.2% to 5.0% last year. The main economic drivers are the private domestic consumption, powered by its huge market.

Hong Kong’s territory has a laissez-faire economy. The government policy is only for non-interventionist. The government handles and discloses minimal business requirements except for the public limited companies. The capitalization requirements are minimal for private companies, and they need to file financial statements if they are incorporating as a Hong Kong Subsidiary.

As you can see, both have good business environments, but Indonesia is one of the future’s economic giants. Therefore, doing business in Indonesia vs. Hong Kong is a fair comparison.

The economic freedom of Hong Kong has a score of 891, which means it is the 2nd freest in 2020. Its overall score had a decrease of 1.1 points, mainly because of the investment freedom score decline. Hong Kong is 2nd among the 42 countries in the Asia-Pacific region. Its score is a lot higher than the averages of the world.

Hong Kong’s economy is ranked as the freest from1995 to 2019 compared to other countries in the world. The GDP is steady over the last few years, and its open market has become more integrated with the mainland because of trade, financial links, and trade.

Over 9,000 foreign firms are in Hong Kong, and 1,300 of them are from the USA. Therefore, when the Chinese legislature passed a security law recently, they want to prevent subversion, succession, foreign interference, and terrorism. A lot of CEOs and top executives started to wonder about the implications of business.

Indonesia’s economy has experienced a strong expansion over recent years, making it a very important part of the global economy. Now, it is currently Asia’s 4th largest economy. In addition to its global output, only under 1.5% is expected to increase over the years.

Over time, the Indonesian economy structure has experienced considerable change. According to history, the economy has heavily weighted towards the agricultural sector. It reflects how the stage of economic development is and the government policies during the 1950s and 1960s in promoting agricultural self-sufficiency.

About 10 to 20 years ago, those who are from Hong Kong did not see Indonesia as a famous destination for business and travelling. Recently, Hong Kong has become more interested in exploring Indonesia’s business sector. There are more individual inquiries during the past 5 to 6 years, study missions, business delegations, and more from Hong Kong to Indonesia than before. These are for different sectors from investment and trading.

Indonesia is currently focused on economic development, that takes up projects like the 100 Smart City movement. This is meant for the development of smart cities for having a better quality of life through technology integration. Improving better transport infrastructure and constructing high-speed railways and highways that connect it to neighbouring countries. There are new toll roads as well.

Hong Kong wants to bring together local and overseas companies into one business community. They constantly interact with thousands of international firms and businesses in a powerful environment. It opens opportunities for both countries to set up their networks internationally, finding new sources, etc. However, Hong Kong’s jurisdiction is expensive, and they charge $1,400 to incorporate a company alone.

Why Should Hong Kong Businesses Set Up in Indonesia?

Indonesia made a lot of effort to make it worthy of being in its current ranking when it comes to ease of doing business. It was number 128 in 2013, and today Indonesia ranks 91. This is why Indonesia has attracted more investors and businesses over recent years. Indonesia has improved in the following:

There Are Free Trade Agreements

As an ASEAN member, Indonesia trades freely with 9 of its members. That means there is minimal to zero tax. Businesses that want to export goods to markets in South Asia can do it easily with Indonesia’s presence. With its connection to ASEAN, the trades of Indonesia have access to more than 650 million people.

The maximum percentage of a company that can be owned by a foreigner can be from 0-100%. The percentage is dependent on the classification of business.

Investors From Other Countries Can Own Land

Since 2015, foreign entrepreneurs can have their land in Indonesia already, but only for three purposes: to use, to cultivate, and to build.

The Hong Kong security law affects their economy, which is also why the business owners are looking to expand to other countries. Indonesia is a good move because of its economy and GDP. If you need assistance to set up a business in Indonesia, contact 3E Accounting Service.