Doing Business in Indonesia VS India

Investing Your Money in Indonesia VS India 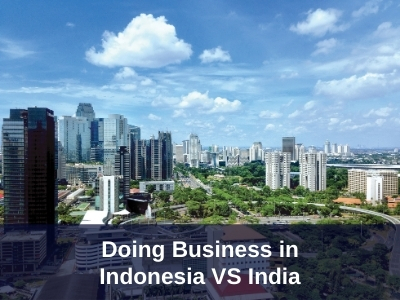 Before taking the plunge, foreign investors are looking at all the pros and cons of establishing a business in a specific country. They would like to know if there is a possibility of having a return on their investments in the shortest possible time. If you’re comparing Indonesia VS India, it’s best to know which are the most open sectors for investment.

In addition, you would like to know if there is a demand for different types of products. Lastly, investors are also checking the business climate. Let us take a look at these factors.

Sectors Allowed to Have Full Foreign Ownership: Indonesia VS India

The Indonesian government has allowed more sectors to have 100-per cent foreign ownership. It said that these industries have enough domestic competition already and are requiring additional support through technology or financing. In trade, energy, and industry sectors, the following can be fully owned by foreign investors:

In the healthcare industry, the government allows investments in the following:

In the tourism and creative industries, foreign investors can fully own bars and restaurants, sports facilities, and film studies. Foreign entities can also have 100-per cent ownership over e-commerce businesses if they are investing over $7 million.

In 2016, India made a bold move in its foreign ownership rules to attract more outside investments into the country. The government has been allowing airlines and some defence industries to be fully owned by foreign investors. Before, only 49 per cent and 74 per cent, respectively, are the allowed percentage of foreign ownership in the said sectors. In addition, the Indian government also eased the investment policies towards pharmaceuticals and food production. These moves are showing that India is open to having more foreign investments on its shores.

In 2019, the merchandise imports received by Indonesia amounted to $170 billion, around 10 per cent of which is accounted for by the petroleum oils and oils obtained from bituminous minerals. In total, these inbound shipments amounted to $18.7 billion. Indonesia also imported electrical apparatus for line telephony, motor vehicle parts and accessories, wheat, and automatic data processing machines in 2019. In addition, the country also received shipments of petroleum gases, semi-finished products of iron, gold, and electronic integrated circuits. Most of the shipments came from China amounting to $44 billion or 26 per cent of the total imports.

The country imported goods amounting to a total of $480 billion in 2019. Majority or 60.9 per cent of the inbound shipments were purchased from its fellow Asian countries. Looking at its import basket in 2019, Indonesia spent most in mineral fuels ($153.5 billion) and gems and precious materials ($60 billion). It also imported electrical machinery and equipment ($50.4 billion), machinery and computers ($44.1 billion), organic chemicals ($20.5 billion), plastics ($14.6 billion), and iron and steel ($11.6 billion), among others.

The Indonesian government has been continuing its pursuit of making the country more business-friendly. With this, it recently enacted an omnibus bill seen to boost job creation and investments in Indonesia. It is aimed at reducing the red tape, simplifying the process of land acquisition, relaxing restrictions on foreign investments, and providing more perks or incentives to free-trade zones. By doing so, the country believes it is increasing its international competitiveness.
The reforms under the bill are also seen to position Indonesia in a much better light for manufacturing supply chains. It was noted that many multinational firms are now looking to diversify their supply chains amid the increasing trade tensions between the United States and China.

The Indian government is making sure its policies are comprehensive and encompassing many areas. With this, among its regulations are the following:

All these policies are aimed at growing the economy of India. How? They are addressing the conduct of doing business in the country, which is one of the primary considerations of all investors. They need to know that the country has a very accommodating business climate.

Summarizing the Indonesia VS India Comparison

Looking at the foreign ownership rules, both Indonesia and India are very welcoming in certain sectors, allowing 100-per cent stake in the businesses. Such a policy is something that the foreign investors are looking forward to when putting up their business. In addition, Indonesia and India have healthy demand for imported goods as shown by the recent trade data. These make them viable markets for different quality products.

Meanwhile, in terms of business policies and regulations, both countries are making sure that investors will find it easy to set up their companies. In fact, Indonesia went the extra mile when it introduced an omnibus bill aimed at generating more jobs and attracting more investments.

Setting Up Business in Indonesia

When you are a foreign investor setting up a business in Indonesia, you might need extra help, especially if you are not knowledgeable enough about the country’s policy. If you are thinking of employing foreign workers, you will have to secure a work permit in Indonesia. This is to allow them to stay in the country legally.

If you need help in doing so, reach out to 3E Accounting. We are an excellent team of top-notch professionals equipped with the right expertise and skills. We can help you with every step of the way. Contact us today.