Why Business People Weigh Pros of Indonesia VS United Kingdom 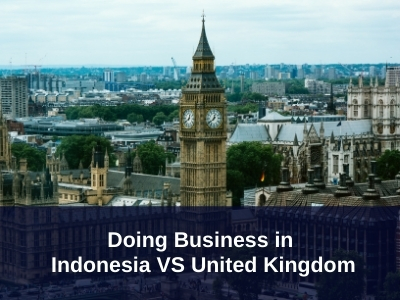 It may seem difficult to understand why you should choose to do business within and with Indonesia VS United Kingdom. After all, both countries are experiencing a recession-related directly to the ongoing global covid-19 viral pandemic. Economic activities in either country are on hold as they try to find ways to overcome the pandemic’s effects.

It may look like both countries are knocked out of contention – but that would be stretching the truth. Once the pandemic has been resolved, you will probably welcome the debate regarding which of these two you should start investing in.

Using English for Business: Indonesia VS the United Kingdom

You should know that both Indonesia and the UK populace do have a working knowledge of English, especially for business activities. This is because their respective governments support reliance on English while in school and in regular business circles. There are slight differences, though.

The UK is a monolingual society that embraces the dominant use of the English language. The government is encouraging the youth to learn a second language – most of the time, they choose either French or German as their optional second language. But UK citizens usually use English for business activities.

Comparison Between Indonesia VS United Kingdom – Standard of Living

Most people understand that the United Kingdom has a higher standard of living compared to Indonesia. This is great for UK citizens but expensive for businesses that supply UK residents’ goods and services since their overhead goes up.

For this reason, some companies opt to transfer out of the UK and relocate to Indonesia instead. Indonesia has a much lower standard of living, meaning businesses don’t have to spend as much when they operate in Indonesia. They can then park their savings in investment vehicles or re-channel the savings back into their business.

Another major factor in the Indonesia VS United Kingdom debate is that Indonesia has centuries of experience as a trade hub within Southeast Asia. Even when the Dutch were colonizing Indonesia, it could conduct a busy trading system with its neighbours. Indonesia is a member of the ASEAN, so now it can work trade readily under favourable terms.

On the other hand, the UK is not as strong in the ASEAN community as Indonesia. Yes, the UK is a credible trading partner, but the terms are not as favourable as Indonesia’s. So, if your intent is to bring your goods and services into the ASEAN market, your better option is to choose Indonesia as a home base.

Workers Tilt Scales in Favor of Indonesia VS United Kingdom

The UK indeed has an educated workforce due to its excellent system of education. However, the UK’s price to pay for such a well-educated labour team is the high standard of living. This may seem prohibitive for some businesses that are trying to keep afloat financially. Not all companies can afford to pay high wages plus benefits for their employees.

On the other hand, Indonesia’s young workforce may be willing to do the same work as their UK counterparts. But the Indonesian compensation level is significantly lower than the European Union standards (which the UK only recently left). This is because the Indonesian standard of living is much lower. This also spells savings for companies that want to invest but retain their competitive advantage.

Another factor that may convince an investor to choose Indonesia VS United Kingdom is real estate. Yes, Indonesia allows foreign investors to buy their real estate. Even investors who will only be in Indonesia temporarily can buy properties.

You may legally buy land to build with, to cultivate, or to use. This means you can purchase a nice apartment or house in Indonesia while residing there, under the “Hak Pakai” terms of Indonesia. Under this arrangement, you may then rent it out or sell it, provided you are working with a valid company or are operating under the KITAS work and stay permit.

One source predicts that up to 90 million citizens will become part of the Indonesian middle class by 2030. This has great implications for the energy needs of Indonesia, which will probably also go up. However, Indonesia is committed to switching to more renewable energy sources so that its environment doesn’t suffer. After all, the beautiful environment and complex biodiversity of Indonesia is one reason that tourists from around the world visit and stay.

However, the UK is currently heavily dependent on nuclear energy instead, despite the risks it faces from that energy source. In fact, the UK intends to keep building more nuclear power plants since it also expects more robust economic growth.
Conclusion

Knowing all these advantages, you are in a better position to decide between setting up your business in Indonesia or in the UK. If you are convinced but would like more information about relocating your company to Indonesia, we at 3E Accounting are offering Business Advisory services. Contact us soon so we can start planning your business activities today.