Indonesia to Raise the Cigarette Excise Tax by 12.5 Percent for 2021

Indonesia to Raise the Cigarette Excise Tax by 12.5 Percent for 2021 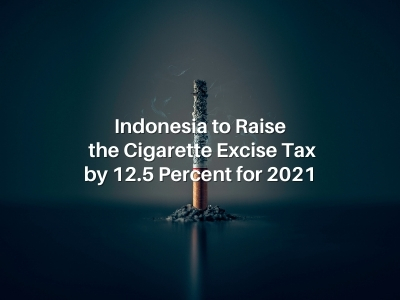 Indonesia’s state government has announced its plans to raise the minimum price of cigarettes by 12.5 % in 2021, said a finance ministry spokesperson in an effort to reduce smoking rates.

The Finance Minister clarified that the government had attempted to attain a balance between increasing numbers of smokers. This mostly applies to young adults and women.

“We are concerned about health, while on the other we have to pay attention to farmers and cigarette workers,” the minister said, “and also guard against a rise in illegal cigarettes. The increase will take effect on January 1, as observed by tax services in Indonesia.

According to the research of Tobacco Induced Diseases (TID) entitled “the public support for cigarette price increase in Indonesia,” the cigarette excise tax increase is approved by the most populace, including smokers.

The current policies of the government have been ineffective in an attempt to reduce consumption. Therefore, price increase induces scientific evidence for the state.

“Cigarette price increase is supported by younger people and higher-income groups as they have less expensive and less likely to smoke. Governments, academics, NGOs, and tobacco control activists should generate the understanding that increasing cigarette prices will improve the quality of life.”

However, the Tobacco Control Support Center and the Association of Indonesian Public Health (TCSC-IAKMI) chairperson stated the tax increase was inadequate to decrease smoking prevalence.

“Smoking can only be reduced by increasing cigarette excise tax up to 25%, raising the retail price by 57%, and banning the sales of single cigarettes,” the TCSC-IAKMI chairperson said.

Keen regret over the dismissal of the government’s excise simplification system was also observed. According to the chairperson, tobacco excise taxes are ideal for developing state income and limiting cigarette use.

The Current State of Affairs

As per the World Health Organization (WHO), early 70% of adult men smoke in the country, one of the world’s highest rates. Moreover, tobacco kills 225,720 people each year or 14.7% of all deaths—primarily caused by cardiovascular diseases developed by smoking.

The WHO recommended fiscal measures to Indonesia in reducing cigarette consumption. This includes implementing tobacco curbs as a multisectoral public health priority and a comprehensive government program while simplifying the tax structure.

“The above fiscal policies on tobacco should be complemented with non-price measures such as implementing 100% smoke-free policies, ban on tobacco advertising, promotions, and sponsorships, and larger-sized pictorial health warnings to reduce the social acceptability of smoking to reduce tobacco use more significantly.”

After China, Indonesia is remarked as the world’s second-largest tobacco market. In 2019, the cigarette excise tax was observed to fall at the same level. The value of tobacco remained its high value due to the price inflation and consumer engagement, as per the Euromonitor International reports.

However, due to the COVID-19 impact, the tobacco industry’s current value growth has experienced a temporary drop in demand. But a slower return to the growth rate is foreseen in the year 2021.

Meanwhile, the largest cigarette companies in Indonesia incorporate Gudang Garam, HM Sampoerna, and the unlisted Djarum Group. However, these companies have yet to comment.