Why Choose Indonesia for Start-up Company

More Entrepreneurs Are Choosing Indonesia to Start-up Their Companies 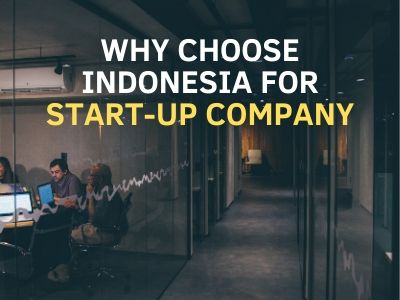 A country with complicated bureaucracy and policies, like former Indonesia only holds back development. But, Indonesia is now moving forward. In the past several years, its economy has grown by leaps and bounds. Jakarta, its capital, is a modern city and reflects modernisation very well. Although the rest of Indonesia may reflect a diverse range of modernisation and local economic activities, it is a unique identity of Indonesia as a whole. Setting up a company in Indonesia is now all for the better and more accessible. Furthermore, the start-up scene in Indonesia is booming as more are choosing Indonesia for a start-up company.

Geographically, Indonesia is a vast country. Therefore, there are still many areas or zones that have yet to experience the flourishing business culture. Currently, start-ups are generally concentrated in Jakarta and its neighbouring regions. This is because larger cities could accommodate digital and technological sectors. The digital economy is contributing tremendously to Indonesia’s economy as a whole in these recent years. Indonesians generally are tech-savvy. Hence, the advent of tech start-ups in the country has great support. This is not to say that the market is saturated. The Indonesian market for start-ups’ are aplenty, if you study the market religiously.

Tech start-ups in Indonesia began around ten years ago. Since then, more and more educated Indonesian youths are choosing entrepreneurship as a career. Many start-ups in the country have become unicorns, which are valued at over US$1 billion. As such, the success of unicorns has spurred more start-ups emerging and begin to flood Indonesia’s market. Similar to the untapped sectors of the innovative economy, new ideas to improve conventional methods are taking place widely in Indonesia. For example, the general public in the country prefers using cash for payments. But they embrace technology as it comes. Hence, there is an opportunity for e-wallet to flourish. As such, Fintech company like KinerjaPay comes into view.

A start-up ecosystem can thrive in a country like Indonesia can only go so far with the support of the government. Currently, the President plans to initiate numerous projects designed to boost Indonesia’s innovation and entrepreneurship. This includes promoting up to one thousand start-ups valued at US$10 billion by the year 2020. Besides increasing the economy, innovation, and emerging technology start-ups can push manufacturing industry competitiveness further. In short, the more entrepreneurs choose Indonesia to start-up their company, the closer Indonesia is to their vision of “Making Indonesia 4.0” a reality.