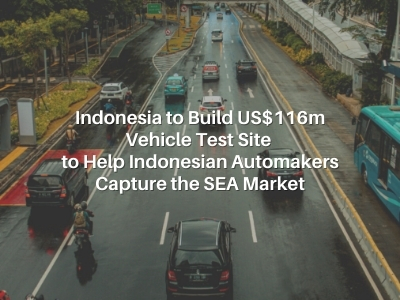 It was considered as an international standard motor vehicle “proving ground.” A project road map similar to a racetrack to be built in Bekasi, West Java. The development shall start in 2022 and be completed by 2024.

Indonesia is the second-largest car manufacturing state in Southeast Asia and the ASEAN region next to Thailand. This includes Toyota, Nissan, and General Motors. However, the country ought to pull more efforts due to the increasing gap over the years of producing vehicles.

Moreover, as per IndonesiaInvestments, the state is primarily dependent on foreign investors to establish aground car construction pieces of equipment. The state has been imposing new guidelines and projects to improve the local restoration.

Indonesian automakers observed that their production and sales decline in some cases over 40 per cent in the first half of 2020. The pandemic has impacted manufacturers and auto operations.

Fortunately, market sales have been increasing since the lifting of restrictions. In June, 17,600 units were manufactured, and sales expanded to nearly 30,000 units, as per AHK Indonesien.

According to the Association of Indonesian Automotive Manufacturers, automakers in the country exported 180,903 completely built-up (CBU) vehicles in October 2020. It depicted a third of total vehicle productions based on data.

In a webinar called Jakpost Spotlight webinar titled “Improving vehicle safety in Indonesia”, the minister addressed the automotive industry issue. “[Indonesia] produces a lot [of cars], we use a lot of cars, but we don’t export as much.”

Furthermore, the industry aimed to export one million units and private exchanges to two million units by 2025. Business in Indonesia ought to raise automotive products by then.

The road map will serve as the testing ground for Indonesia-made vehicles in making them compliant with the international benchmark United Nations Regulation (UNR) on cars. This includes motorcycles, three-wheelers, automobiles, vans, trucks, and vans.

To strengthen Indonesia’s trade surplus, the state government shall raise vehicle exports and commodities together with the automotive industry. According to Statistics Indonesia, the business operated at US$17.07 billion in the first ten months of this year.

The proving ground is listed as one of five multi-billion rupiah government-to-enterprise collaboration plans delivered by the Transportation Ministry. Meanwhile, the country’s main competitor is Thailand and Vietnam in the Southeast Asian auto market.

Bank Indonesia to Double the Use of the Quick Response Indonesia Standard (QRIS) Among Small Businesses
January 18, 2021
Go to Top