Doing Business in Indonesia VS Thailand

Learning to Choose Between Indonesia VS Thailand for Business 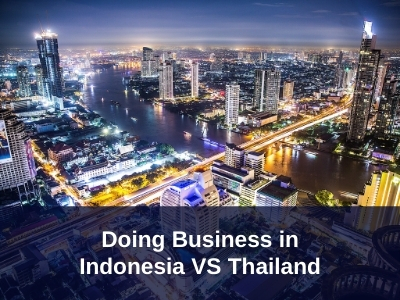 People wondering where they could set up their new business may choose between Indonesia VS Thailand. Both countries have their strengths when it comes to business. For instance, Indonesia has strong Internet access opportunities for its citizens and foreign residents. On the other hand, Thailand has a booming medical tourism industry that foreign nationals and Thai citizens alike patronize heavily. It can be hard to choose between these two countries, especially when you read more about their strong points.

Political Situation in Indonesia VS Thailand

Both countries have experienced foreign influences throughout the past two millennia. This influx of power brokers may explain why both Indonesia and Thailand had political problems after the foreigners had gone.

Right now, though, Indonesia is the more stable of the two politically. This is because Thailand is experiencing street protests initiated by people who want to see political reforms. This could be a sign of heightened political instability shortly. This may also mean that Indonesia is a more attractive and peaceable option for business for the time being.

Indonesia has a long history of political unrest, as well. But it is good that it has managed to join the international community. It is a member of organizations such as the United Nations and the Association of Southeast Asian Nations (ASEAN). It is also campaigning to donate aid to impoverished countries, whereas before, it was a recipient of international assistance. This may be a sign of Indonesia’s inner strength, which bodes well for the business sector.

State of Education in Indonesia VS Thailand

Indonesia is investing in its citizens’ education by offering a compulsory 12-year educational system for the youth. This may explain the very high literacy rate of 96% among citizens. However, one problem Indonesia has to resolve is the relatively low enrollment in tertiary education. This indicates that students opt to seek work instead of moving on to college or university level education.

This is where Thailand has to improve since most of its labour force belongs only to the informal sector. Yes, the Thai government is offering free education up to age 17. But informal sector workers have at best a primary school education only. This means that the lack of education may eliminate options for work in higher-paying jobs that would give Thai youth better life opportunities. This might tilt the balance in favour of Indonesia if you had to compare Indonesia VS Thailand labour force qualifications.

Science and Technology Investments for Indonesia VS Thailand

This area of science and technology investments is a study of extremes in Indonesia. On the one hand, Indonesia invested only 0.1% of its GDP for 2017 in science and technology. On the other hand, the country does have an active space program and space agency dubbed the National Institute of Aeronautics and Space. It is also the only Southeast Asian country to manufacture aircraft right now.

Thailand is also investing in science and technology. One of its chemists, named Krisana Kraisintu, has developed HIV/AIDS treatments that are affordable for poor patients. This means many lives have been and will continue to be saved, earning Krisana Kraisintu the title “the Gypsy pharmacist.”

Economic Prospects of Indonesia VS Thailand

Another critical factor that may swarf Indonesia VS Thailand’s debate is the state of their respective economies. Indonesia was severely affected by the 1997 Asian Financial Crisis. The country saw inflation reach 78% at that time. However, it has bounced back, primarily through imposing reforms in the banking sector and boosting domestic consumption. It has seen annual growth zooming between 4% to 6% starting in 2007, extending to 2019. Indonesia is now considered the biggest Southeast Asian economy.

The 1997 Asian Financial Crisis harmed Thailand also since it was the Thai baht’s performance that caused the event But Thailand has also been able to revive its economy by focusing on strong exports starting in 1999. Still, the country has room for improvement, especially since, among all households, 3% are considered bankrupt (as of 2010). Thailand is a close second to Indonesia as far as the size of the economy is concerned.

State of Agriculture When Examining Indonesia VS Thailand

Indonesia has a robust agricultural sector because it has strong trade activities with its trading partners. (Ironically, one of the strong trading partners of Indonesia is Thailand, actually.) The other partners include South Korea, Malaysia, India, Singapore, Japan, USA, and China. Agricultural produce such as rubber, spices, medicinal plants, cacao, coffee, tea, palm oil, and rice are quite in demand in such markets as exports.

Rice exports dominate the Thai agricultural sector, for its part. Thailand used to be the biggest exporter of rice throughout the world. However, agriculture employs fewer workers now compared to 1980. The country is trying to shift from traditional technologies, which were quite labour-intensive, to newer agricultural technologies. These are industrialized and even more competitive.
Conclusion

The biggest problem when analyzing Indonesia VS Thailand at the moment seems to be adapting their human resources towards better use of new technologies. These two countries need to harness the talents of their human resource pool through sufficient training. This calls for better educational opportunities for their labour force in every industry, but particularly in labour-intensive agriculture. It will be interesting to see whether Indonesia or Thailand becomes the biggest economy in Southeast Asia, and even in the world, after that.