Doing Business in Indonesia VS Malaysia

Doing Business in Indonesia VS Malaysia – for Investors 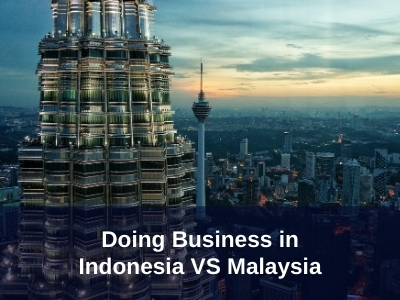 When considering doing business, the Indonesia VS Malaysia equation depends primarily on the long-term expectations of investors. Short-term gains may give way to long-term problems such as environmental degradation and political instability. Because of this, foreign investors may want to look more closely at their options first.

Foreign investors can choose between Indonesia VS Malaysia by considering the role of environmental degradation. This is important because all business people understand that their long term profits are inevitably intertwined with a flourishing environment. Indonesia has admittedly been lacking in this but has the upper hand since it still has quite a many rainforest and maritime resources left.

On the other hand, Malaysia is worse off than Indonesia as far as the environment is concerned, despite prioritizing the tourism industry lately. To catch up, Malaysia is positioning itself as a medical tourism hub to bring in more tourists.

Size of Economy is Major Factor Behind Indonesia VS Malaysia Option

Indonesia is now the biggest economy within the ASEAN. But it has to do better unless it wants Malaysia to catch up, despite being a much smaller economy in that same market.

One reason Indonesia is the biggest ASEAN economy is that it seems to have great infrastructure. Its transport system has evolved over the decades, despite being in an archipelago. Indonesia can send goods to domestic markets or deliver to international markets, as needed. In fact, the country can conduct trade easier and faster by land or by sea.

For its part, Malaysia succeeded in becoming the 3rd largest economy in the ASEAN by 2019 based on country GDP. If allowed to continue in this path, though, it might be able to beat Indonesia with its economic growth. It has also kept pace with its economic expansion through its wonderful infrastructure development.

Foreign investors need to look at the growth of Indonesia VS Malaysia’s population as another major factor. Indonesia is known as home to at least 237 million people, while Malaysia has only a little over 28 million residents. This means that each country has its sizable domestic market for their respective goods and services.

Among those statistics, most of Indonesia’s residents are in the 30+ age bracket, meaning they are of adult working age. In Malaysia, for its part, residents who are between 15 to 64 years of age make up around 60% of the population. This means Indonesia has quite an advantage when it comes to supplying the workforce to industries. Malaysia, though, has held its own in this competition.

One problem that Indonesia should urgently address is training its youth to start learning English as a second language. English may be safely assumed to be the lingua franca of international business, so this is necessary. Malaysia recognized this to be true, like the rest of the ASEAN countries. That is why Malaysia instituted English as its second language.

Indonesia is reluctant to adopt English as the prevailing second language because it wants to avoid the “dilution” of its Bahasa Indonesia. But Malaysia is teaching both its Bahasa Malaysia and English to its youth with favourable results. To stay ahead in the world of business, Indonesia ought to follow suit.

One major factor that can decide the winner in the Indonesia VS Malaysia race is the former’s ability to produce energy for its industries. It is currently a major producer of energy resources such as oil and gas, coal-based methane, and coal. Hydroelectric power generation also exists through its dam. Because of this, Indonesia emerged as the 9th-biggest energy producer in the world by 2017.

In Malaysia, much of its energy needs are dependent on oil and natural gas. It cannot match Indonesia’s energy production capacity yet. But analysts estimated its oil and natural gas reserves as being the 4th-biggest within the Asia Pacific region alone.

It seems that Indonesia and Malaysia are poised to compete aggressively within the ASEAN and in the international business world. Both these countries are inviting foreign investors to bring in significant investments for them. Indonesia has a sizable lead over Malaysia due mainly to the size of its country and population. If it can bring in more foreign investments, Indonesia is the ASEAN’s top dog to beat.

If you are planning to Set Up a Business in Indonesia, we at 3E Accounting would be glad to assist you. Contact us today and get to know the quality of our business services firsthand.