Doing Business in Indonesia VS Canada

What to Consider When Investing in Indonesia VS Canada 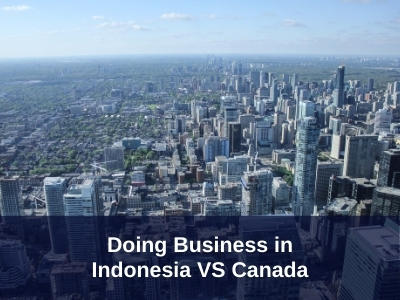 A stable economy, supported by good governance, is what investors are looking for when setting up their business. They are making sure that their company will thrive amid a suitable business landscape. Looking at Indonesia VS Canada, these countries are proving to be the place to be for investments. Let us take a look.

In 2019, Indonesia recorded consumer price growth or inflation rate of 2.72 per cent. It is the lowest in the last two decades, according to the Statistics Indonesia (BPS). The decline in inflation was due to weaker inflationary pressure amid government-regulated prices. The 2019 inflation is lower than the government’s target of 3.5 per cent for the year, which is a good thing because it means it has tempered the price growth.

In 2018, Indonesia’s inflation figure stood at 3.13 per cent. It was driven by the higher prices in gold and red chilli, as well as housing rental rates. In addition, higher fuel prices and airline fares contributed to the increase in the overall consumer prices in Indonesia.

There are many initiatives the Indonesian government has been implementing to keep the inflation level manageable. These include the following:

To recall, gasoline prices were on the uptrend in 2017 and 2018, but they fell by 6.1 per cent on an annual average basis. This, as crude oil prices were low because of a decline in global demand.

On the other hand, the food prices saw an increase of 3.4 per cent in 2019 because foods bought from stores and restaurants registered higher costs.

Indonesia does not want to be left behind. Its government has been continuing its pursuit of making the country more business-friendly. With this, it recently enacted an omnibus bill seen to boost job creation and investments in Indonesia. It is aimed at the following:

By doing so, the country believes it is increasing its international competitiveness. The reforms under the bill are also seen to position Indonesia in a much better light for manufacturing supply chains. It was noted that many multinational firms are now looking to diversify their supply chains amid the increasing trade tensions between the United States and China.

Since 2016, Canada’s business community and economy have been growing strong and steady, even beyond other 67 countries. Canada has been touting its positive output growth and a healthy labour market. Both factors are supporting higher levels of consumer and business confidence, along with wage growth. With this positive sentiment and improved revenue channels, Canada is recording robust growth in spending on household consumption and business investment.

In addition, the country famous for maple syrup is providing investment incentives in many aspects. These include the following:

The industries that may avail of these perks are the following:

The country is showing that it is serious when it comes to developing its infrastructure, especially because it improves transportation in the country. In 2020, it set aside $27.64 billion for the said project, which is around 5 per cent more than what is allocated in the previous year. The bulk of the budget is for building roads, aimed at expanding the major road network by 837 kilometres. The Indonesian government is also set to build 6.9-kilometer new bridges. It is also building additional housing and 49 new dams. There are also airport projects.

The Canadian government is doing its best to keep the country’s road links to be as connected as possible as well. Recently, it has greenlit funding for three infrastructure projects aimed at improving the roads and bridges in Ontario. These projects are specifically located in Casey, Evanturel, and Kerns townships. The projects vary from building a new road linkage, replacing and installing new guardrails, and replacing a bridge. All of which are seen to support the ease of doing business in Canada. In addition, infrastructure projects are also seen to support the tourism industry with better connectivity.

Summarizing the Indonesia VS Canada Comparison

It is good to know that both countries have manageable inflation levels. These means that prices in most goods are affordable, making the purchasing power high. This is beneficial for all the investors because their spending will not be inflated by higher costs. Along with this, the economy of Indonesia and Canada are being supported by proactive governments. As mentioned, both are doing their best to keep their economy on the top.

Meanwhile, Indonesia and Canada are also ensuring that the ease of doing business in their countries are improving throughout the years. Therefore, they have infrastructure projects to support the transport efficiency. Such is important because road links are necessary when delivering goods and items.

Professional Management for Your Business

Managing a business, especially a startup, is no joke. You will have to factor in a lot of elements: budget, operations, employees, customers, long-term plans, oversight, and more. Keeping them in check will help your business turn into a success.

Should you need business solutions services in Indonesia, 3E Accounting is the answer to what you are looking for. We are a top-notch corporate service provider ready to serve you and your company. We will guide you in every step of the way. Contact us.