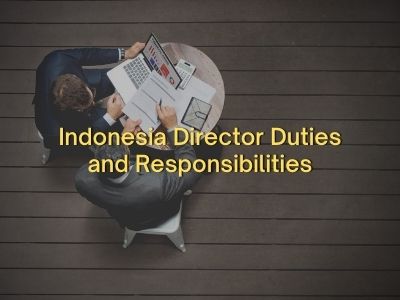 If you are a director or director-to-be in Indonesia, this article is a must-read. The corporate world is not of a forgiving nature; that’s why it is vital to properly understand the directorial duties one will possess after being bestowed as a director. Just as how there are duties and responsibilities for directors, the same job also comes with offences and liabilities. Learn the various Indonesia director duties and responsibilities and become well-informed on this topic today!

Every country has more or less the similar responsibilities when it comes to top management; directors are to lead the team and make good business bargains and negotiations, must not act out of line and definitely avoid abusing their vested powers. That said, there are also laws unique in the subject that differs from one country to another. With more than 267 million people calling Indonesia home, the largest archipelago houses millions of active companies. With that being the case, the Nusantara has appropriately drafted and enacted laws to outline directorial duties and to combat mismanagement.

What Do Indonesian Directors Do?

Indonesia Company Law was created to regulate company operations in the country.

Among the duties for directors include:

Apart from that, directors also need to make properly informed decisions for the best interests of the company. He or she must show great skill, care and diligence as a company director. Under no circumstance are the directors allowed to abuse their power, leak confidential information, use the company’s money and resources for personal use and commit sneaky dealings.

Make It or Break It

As you may have realised by now, directors hold a monumental position in the company. These substantial figures have the fiduciary duty to carry out their obligation, supervise the organisation, manage the staff, handle internal and external issues. Simply put, they are responsible for company management, overall. Although at first glance, the title of a director may seem glamorous, but it is crucial to fully comprehend that Indonesia director duties and responsibilities come with a price.