Doing Business in Indonesia VS Switzerland

Opening a Business in Indonesia VS Switzerland 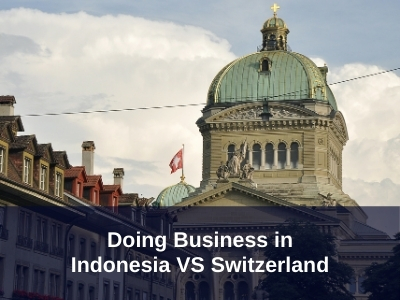 If you are thinking of setting up a business in Indonesia vs. Switzerland, you first have to know about how it is to do business in both. In Switzerland, they have an efficient government, educated workers, flexible labour market, and their tax rates are moderate. In addition, they have one of the world’s most honest and transparent governments. Hence, this is why Switzerland is an attractive location where international companies can settle.

Indonesia has a growing economy, and they are catching up fast. In recent years, its economy has increased significantly. This places it as one of the best countries for investors in Asia. Accordingly, foreign investments in Indonesia has implied $29 billion in the year 2016. The industries that attract this much money are the main sectors.

Indonesia was mostly mentioned as the right candidate to be part of BRIC (Brazil, Russia, India, and China). Their economy has important points of difference compared to Asian neighbours like Thailand and Singapore. Specifically, the economy of Indonesia is mostly driven by domestic activity instead of exports.

After a huge economic setback during the 1990s, the economy of Indonesia had increased over the recent 10 years. It has a GDP growth that has an annual average of 5.7%.

They have a market-based economy where the government plays an important role, including the administration of prices for basic goods like rice, fuel, and electricity.

The agricultural sector in Switzerland contributes to 0.7% of their GDP in 2017. However, the sector does not affect the economy very much, and the Swiss government protects it very much. There are a lot of government subsidiaries that farmers benefit from and high tariffs that encourage agricultural domestic prices. 60% of their food is local produce. Examples are wheat, barley, potatoes, fruits, sugar beets, meat products, milk products, and vegetables. Since Switzerland meets 65% of the food demand in their country, the government puts a huge part of its budget to boost food production.

Switzerland’s financial sector, specifically the banking sector, is the main element in their economy. Its contribution to the GDP is about 10% of the added gross value. When 2018 ended, there were 248 banks that have 2,615 and 7,187 ATMs. Aside from that, Switzerland got rid of 223 overseas branches. Their banking sector is popular for the policies and protection they put on foreign accounts. It is a crime to share client information with anyone.

The manufacturing industry contributes to 25.6% of the GDP, and they are among the largest exporters in the world. Their pharmaceutical industry is one of the most competitive in the world. The country manufactures food products and chemicals used in construction like materials for roof coating. They are also known for their high-end watches and clocks. Majority of them are exported to Europe, Asia, and the USA. However, 55% of their watches are imported by Asia making them Switzerland’s largest watch exporters.

Switzerland and Indonesia kept their excellent bilateral relations since 1952. For almost 10 years, the foreign ministries of both have done political consultations policy regularly on policy, human rights, and trade.

Switzerland and Indonesia have been working closely on multilateral environmental policy. These two cooperate within the ASEAN framework. Switzerland considers Indonesia as a future market. Since 2017, the trade volume between them has increased by 50% which matches CHF 2.8 billion.

For the companies in Switzerland, it means the business opportunities in the sectors of consumer goods which includes capital industries mainly for:

Back in 2016, Switzerland exported over CHF 455 million goods to Indonesia. They were 9% precision equipment and watches, 32% of machines and electronics, and 42% pharmaceutical and chemical products.

Opening a Business in Indonesia

With their relations that have been there for decades, it will not be hard for Swiss business owners to avail of incorporation services in Indonesia. Furthermore, their import and export agreement is well-established.

If you want to open a business in Indonesia, contact 3E Accounting to get assistance and help from their experts.