What Does the Indonesian Company’s Document Regulate? 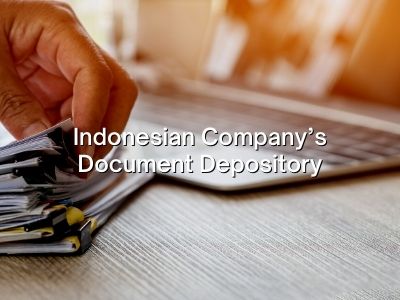 In Indonesia, the Company’s Document is regulated under Law Number 8 of 1997, which helps to ensure the fundamental national development policy in the country’s economy. The primary reason for the promulgation of Law No.8/1997 is to govern a company’s operation so that it runs effectively and smoothly.

Coming into full effect in 1997, the Company’s Document Law replaced the revoked Article 6 of Indonesian Commercial Code and other regulations that are not in parallel with the current Law of Company’s Document. The regulation takes seriously about company documents that concern with:

What Does ‘document’ Mean in This Context?

One key thing to bear in mind is the yearly balance sheet and profit and loss statement, as well as other records related to it, needs to be verified and signed by the company’s management on paper. Had the management of a company or relevant authorities to the company does not stipulate otherwise. Within six months from the company’s financial book year ends, a note, verifying the financial records must be released.

The law also states that the Company’s Document must conduct a records depository. Among the records that must be kept is bookkeeping evidence, which comprises of assets, debt, and capital changes. Additionally, the financial administration and administrative data, which are supporting data used in the making of financial documents, serve as part of bookkeeping evidence and substantial documents of a company. Therefore, since they involve the rights, responsibilities and the activities in the company’s business, the data are to be saved for ten years, from the financial year of the company ends.

Documents that do not have direct ties with financial records are classified as ‘other documents.’
This means that any data, written, orally or digitally recorded that contains valuable information company is counted as other documents as well. The period of other document storage depends on the value worth of the respective documents.

Another thing to keep in mind is, during the preparation of the records, make sure it adheres to the proper writing standards; use either Latin or Roman alphabet, Arabic numerals, Rupiah currency, and compile the documents in the Indonesian language. There is one exception; if a permit is obtained from the Financial Minister, only then can the records be gathered in a foreign language.