Doing Business in Indonesia VS Singapore

Doing Business and Trading in Indonesia VS Singapore 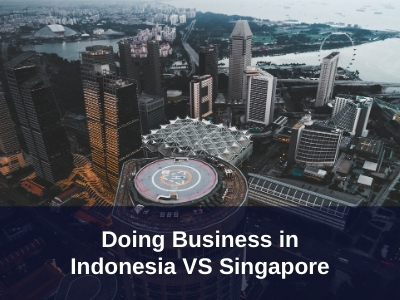 Their trading activities probably influence anyone trying to choose between Indonesia VS Singapore as a future business’s location. Both countries are located within Southeast Asia, meaning they can rely on ASEAN countries as trading partners. Both have been trading hubs and have been in contact with foreign traders for centuries. At the same time, both countries have financial clout due to their current excellent performance economically. Still, you should be aware of some fundamental differences between these two before you invest in anything.

One of the more obvious land area differences between Indonesia VS Singapore is that the former is a large archipelago. Indonesia has quite a lot of land area, meaning there is still room for expansion for trading hubs. Singapore is dubbed a “city-state” since it is relatively small yet is an independent country.

Indonesia has a large and growing population of around 267 million in relation to land size, with approximately 50% of its residents congregating in Java Island alone. That means the rest of the archipelago has few people compared to Java. On the other hand, Singapore only has around 6 million residents, much smaller than the Indonesian population.

Agriculture is Key to Indonesia VS Singapore Survival

Another advantage of Indonesia VS Singapore rivalry is that the former has enough room to pursue extensive agriculture. One product that Indonesia manufactures is palm oil since much of their land was turned over for palm oil production. Indonesia is now becoming more careful about how it maintains its forests and land to sustain its focus on agriculture and promote tourism. (Indonesia needs to slow down or halt its rate of deforestation despite the popularity of the palm oil industry and subsequent expansion).

On the other hand, Singapore lacks a significant agriculture industry since there isn’t much space for that within the city-state territory. Singapore may have to bring in science experts to help set aside some land just for intensive agriculture. This would compete against Indonesia’s advantage in agriculture. The country may eventually be able to export its agricultural products while meeting its own food needs.

Another way by which these two countries can compete is by promoting their respective tourism industries. Indonesia has many forests left, and there is a lot of biodiversity under forest cover still. So Indonesia can generate many tourism-related revenues this way.

Singapore has a robust tourism industry, too, because it has been able to project a great image of being the “Lion City.” In some tourism circles, Singapore earned the name “The Garden City” since it set aside a lot of land as green spaces within its urban areas. Since land is very expensive in Singapore, tourism beats agriculture as a revenue source. Singapore doesn’t have much natural forest cover anymore, though.

Singapore was able to snare the interest of wealthy investors due to the competitive tax rate offered. However, Singapore would like to shed its image as a “tax haven” due to the negative connotation of that term. Both Indonesia and Singapore may be offering attractive tax incentives and other perks to investors. Perhaps both will be able to compete in this sector without losing their respective market share.

For now, though, the Indonesia VS Singapore competition will revolve around their abilities to attract and retain foreign investors for the long term.

The good part about this friendly rivalry between Indonesia and Singapore is that it motivates them to improve financially and economically. It is interesting to observe them since the two differ in the ways they use their advantages. Indonesia is a major powerhouse in the ASEAN and the world. But Singapore is competing actively, despite having less land and natural resources than Indonesia (and other major countries).

Indonesia should be more cautious about how it uses its advantages for the best results. Singapore is stepping up its game, which means there may come a time that it might even beat Indonesia in the world of business.

Should you be in the market for Company Setup services, you can try 3E Accounting. We are available to advise you about this kind of service, along with many others. Contact us today.