Tax Avoidance and Evasion in Indonesia

Know the Difference Between the Two 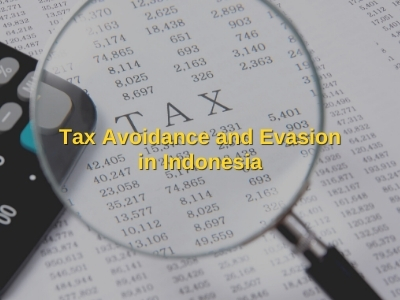 As a business owner, getting as much profit is the regular aim. The higher the profits, the more dividends a business can pay-out to its stakeholders. But, for some business tax or corporate income tax may be a hindrance to the ultimate goal. No matter how a business tries to avoid paying tax, taxes paid to the government are imperative to its growth. Most countries around the globe are facing a similar problem, tax avoidance and evasion. Tax avoidance and evasion Indonesia may not necessarily happen in the country. Nevertheless, the Indonesia government suffers trillions of losses every year from not getting taxes paid by Indonesia’s rich and wealthy.

To the man on a street, tax is understood as burdening the profits of a company. Hence, tax avoidance, in layman terminology means a company that avoids paying taxes. On the contrary, companies avoid paying taxes to the government through careful tax planning. Tax planning is allowed for companies which know their obligation to the country where they operate. As long as the profits are gained in Indonesia, obliging companies must pay tax accordingly. Companies usually hire tax planners to help them with tax planning. But, by abusing tax planning, they would go all out to avoid paying taxes. Most tax planners in Indonesia are highly knowledgeable in the Indonesia tax system. Part of the problem arises from Indonesian-owned companies based in the overseas. With critical unpaid taxes to the Indonesian government, it is about time Indonesia joins the global treaty on the Automatic Exchange of Information on tax matters.

While tax avoidance is entirely allowed by the law, tax evasion is not. Tax evasion happens when a company fails to disclose profits or declare income derived in Indonesia. Evading tax is a crime, and there are consequences to it if companies refuse to disclose income and withhold such information from tax authorities. Under the Indonesia Income Tax Law, companies evading tax due will face imprisonment and ninety per cent of income tax on assets discovered.

Indonesia also has a set of Anti-Avoidance Rules. The General Anti-Avoidance Rules (GAARs) and Specific Anti-Avoidance Rules (SAARs) are in place to prevent tax avoidance violation by an individual or companies. The most common application of the GAARs is on Indonesia’s tax treaty with other countries. Both countries mutually sign tax treaties or double tax avoidance (DTA) agreements to encourage growth and development in each other’s jurisdiction. But companies and individuals have been found to evade from paying tax when they abuse the DTA. In this light, the tax authorities are determined to increase the collection of personal income tax and corporate income tax. Tracking down tax evaders will be Indonesia’s top priority to ensure tax avoidance and evasion Indonesia remain low. It is imperative to ensure that any businesses, whether operating in Indonesia or otherwise, to plan their taxes well. We are always ready on-hand to help you with your tax planning.