Doing Business in Indonesia VS Germany

Businesses in Indonesia VS Germany 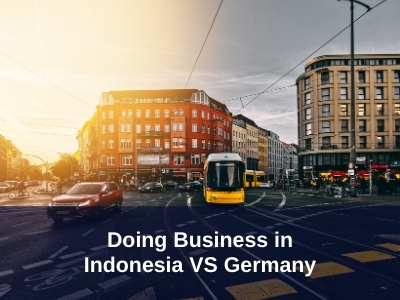 Germany and Indonesia’s diplomatic ties go back to 1952. This is considering their strong economic growth and population, which spotlights the economic ties they have. A lot of businesses like to invest in Indonesia vs. Germany because of their economic stability and standing.

The German exports made to Indonesia increased to 5.3% in 2013, and the Indonesian Imports to Germany went up to 16.8%. Therefore, it can be said that they have seen the potential ever since their diplomatic ties started.

Due to the high growth rates, Indonesia requires plenty of capital goods like for constructing factories and machines. In terms of quality, this is where Germany takes the lead.
To know more about how they compare, read on.

Germany is Europe’s top economic power, and it takes the 4th spot globally. This country has several economic factors, and they must have a high level of coordination to have enough growth. Their foreign trade should also be balanced, prices must be stable, and the unemployment rate should below.

Due to the thread of COVID-19, Germany revised its GDP from 5.7% to 5.5% in September. The improvement is because of the measures they introduced to curb the risk of infection. Despite the slow growth, their economy did not suffer greatly. Companies will pay their affected employees 75% of the sales they have from last year. They expect to have a full recovery from the pandemic by 2022.

The German labour market has displayed good performance even if the economic growth is slow. They kept the unemployment rate stable despite the pandemic’s negative impact.

Indonesia has a 20-year economic development plan that spans from 2005 to 2025. It is cut into 5-year medium-term plans with different goals for development. Currently, they are in the last term that starts from 2020 to 2024. Its goal is to strengthen the economy of Indonesia by improving the human capital and global market competitiveness. The considerable challenges do not hinder Indonesia’s goals. Besides, the global crisis caused by the COVID-19 pandemic has brought complications for Indonesia when it comes to achieving development goals.

As a response to the crisis, their government starts a fiscal package that amounts to 4.3%. The package has funds needed to improve the health sector preparedness and increase social assistance. The World Bank supports the emergency response of Indonesia to COVID-19. This includes enhancing the social assistance and health care systems that also strengthen the financial sector resilience.

Germany has significant spending power, and its location is situated in Europe’s dense transport network. Their workers are highly-skilled, and they are one of the richest countries in the world. The per capita spending power is 20,420 euros, which makes them the highest purchasing power in Europe. Therefore, new ideas do not have a hard time finding a market in Germany.

The infrastructure of Germany also makes it easy for foreigners to set up a business. There is about 830,000 km of roads, modern telecommunications, and 38,000 km of railways. Therefore, it is easier for your products and ideas to reach different destinations.

When you open a business in Indonesia and build an office, the first impression you might feel is the vibrant atmosphere. Some people might find themselves encountering an unusual work rhythm because it either moves quickly or slow. It depends on the implied wisdom of the company. Another side of their business environment that grabs attention is the people. Their locals are pleasant and well-mannered, and the employees respect their employers very much and their workmates. It is not surprising that a lot of foreigners enjoy their beautiful surroundings while holding a meeting.

Indonesia is considered one of the world’s most emerging markets. It deserves that recognition because it can control South East Asia’s economy. This country is freshly industrialized, and it has the 16th largest economy based on the total GDP. The GDP per capita is always ahead and becomes the first region component.

Machinery and equipment are big sectors in Germany, which is why Germany leads in robotics. The country has shown an engineering tradition and also offers solutions to modern manufacturing. More than 6,419 employees in this sector have a growing workforce that generates billions of dollars each year. Germany leads in Europe’s automotive industry in sales and production. Globally, many people recognize the precise and innovative nature of German suppliers and manufacturers of cars.

The German chemical industry is also leading in Europe based on sales and export. Their chemical research and infrastructure are well-developed. The education system of Germany produces competent graduates who are ready to enter top industries.

Why Germans Should Open a Business in Indonesia

Germany exports billions of dollars of goods to Indonesia every year, and it is the 52nd largest German export partner. Their main imports are shoes, textiles, oil-based products, food products, and electronics.

Some major brands already set up offices in Indonesia. Adidas, Bayer, Airbus, BMW, Bosch, Daimler, BASF, ThyssenKrupp, and Siemens already have headquarters in Indonesia. There are several others that have recently opened offices or facilities in Indonesia. Others are already at the point of doing it. Indonesia has Special Economic Zones that Germany is attracted to that offers the right infrastructure for foreign businesses to set up there.

If you are interested in opening a business in Indonesia, and you are from Germany, do not hesitate to contact 3E Accounting. They are the perfect people to help you get started with the process and run your business smoothly.