Doing Business in Indonesia VS China

Doing Business in Indonesia VS China – Pros and Cons 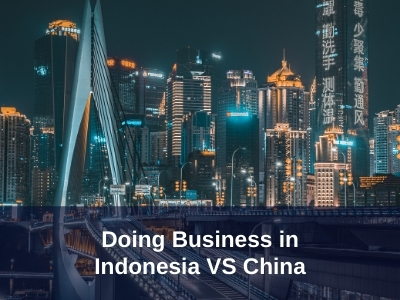 Many people are becoming aware that there is now an apparent Indonesia VS China competition for global business opportunities. China is already known as the low-cost manufacturing centre of the world. However, Indonesia is also starting to become bolder in soliciting foreign investors’ entry to its shores. There are other reasons though that these two countries are competing actively in many industries.

Due to the size of its population, the market-based economy of China has a twofold advantage. First, its relatively young population means China has a distinct strength when offering manpower for industries. If these young workers are given the right training and apprenticeship for specific companies, their productivity will boost businesses’ profit potential. Second, these same young workers represent a large domestic market for goods and services of both domestic and foreign-based companies. This means China can serve both its domestic and foreign markets, possibly with the same goods and services.

Demand for Natural Resources Heats Up Indonesia VS China Competition

Indonesia has been able to sustain itself, although its business focus is on managing its natural resources. Liquified natural gas, for example, is very much valued so that Indonesia can capitalize on its role as a producer. Indonesia also has a robust mining industry, so the government only has to regulate extraction. Foreign investors might also be interested in other industries offered by Indonesia, such as tourism.

For its part, China has to monitor the status of its environment because previous leaders were not prudent about natural resource extraction. So, China has a lopsided development. The country may have a lot of money, but its environment is on the verge of collapse. (Ironically, many tourists would like to visit China in the near future). The worst-case scenario is that China’s environment will be wiped out. If so, China would have to become an importer of products sourced from its trade partners’ environment instead. This may level the playing field in favour of Indonesia.

Another factor that can influence the Indonesia VS China economic race is the degree of political stability within each nation. Indonesia has experienced its share of political turbulence in the previous years. But it seems to be more politically stable at the moment, which explains the government’s confidence in soliciting foreign investment. Indonesia recognizes that political conflict spooks foreign investors, so they run away.

China, however, seems to be having trouble with its political status. This is particularly true in Hong Kong, where the local population protested against the mainland government’s perceived oppression. The world has been watching the story unfold over the past few years. Members of the Hong Kong population feel that they need to fight against the mainland government’s policies. The street protests have become violent in certain instances. Foreign investors don’t like this, so that you can expect dull economic progress in Hong Kong. China has also experienced political trouble with the US recently.

The Indonesia VS China economic situation is no small matter as both countries are giant economies now. China has a reputation for offering low-cost labour for business, especially in the manufacturing sector. But Indonesia has been able to firmly position itself as an alternative low-cost centre for business as well. If companies start to sit up and take notice of Indonesia, you can expect more foreign investors to head there instead.

China has not managed its environment well, which could slow down its economic growth in the near future. Indonesia is luckier or perhaps is just better at environmental management matched with economic growth. If China loses its natural resources, it would have to remain a service-oriented economy. Indonesia will benefit from any perceived environmental collapse of China since investors look for long term business relationships.

Many investors may be on the lookout for Business Advisory consultants who can help them analyze and relocate to a favourable country. You may contact us at 3E Accounting if you require this kind of business service, among others, today.