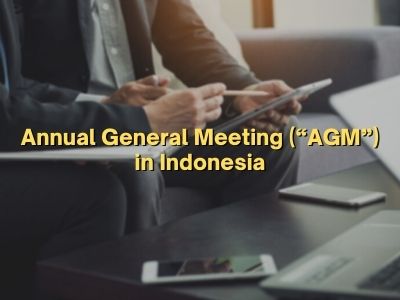 If you are a shareholder, you have probably received a yearly “AGM” notice. But what is it? AGM stands for Annual General Meeting, where if you are a shareholder, you are required to attend a meeting held by the company you have invested in every year. An AGM is legally mandated under Indonesian Law. Both shareholders and company directors must hold one each recurring year. Annual General Meeting (“AGM”) in Indonesia, know more today and start making a proper entrance!

What is It AGM About?

An annual general meeting is held between the directors of a company and the shareholders. In this meeting, many matters will be discussed such as:

And more. These meetings also provide shareholders with the opportunity to ask questions.

The meeting takes preparations mainly on the company’s end. Before a meeting can commence, many preparations will have to be made beforehand. Documents, information, statistics and reports are needed to formulate the basis of that meeting. The meeting has several steps:

What is Discussed in an AGM?

The following are some of the potential topics that will be discussed in an AGM:

Here are a few details that you would benefit from knowing.

There you have it, Annual General Meeting (“AGM”) in Indonesia made easy!