Doing Business in Indonesia VS Denmark 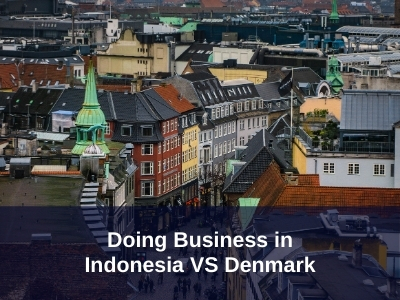 Denmark’s economy is open and robust. Technology and innovation drive this country. The infrastructure is world-class, with one of the highest costs of living. Therefore, opening a business in Denmark is attractive and profitable. Besides, Denmark is strategically located in the southern part of Scandinavia. However, doing business in Indonesia vs. Denmark could be the future.

Before 2030, Indonesia is expected to become the 8th largest economy globally, which could become the 4th if power parity will be counted. Two hundred sixty million people are living in Indonesia, and its continuing growth rate is consistent at 5% to 6% in the past ten years.

The economy of Indonesia continues to grow, and there is more incredible wealth among consumers. And that is what attracts Danish investors to Indonesia.

According to IMF estimation, the economy of Denmark is prosperous, and it had an estimated GDP of 2.4% in 2019. Since Denmark is small with an open economy and payment surplus structural balance, they highly depend on foreign trade. If the global trader gets weaker, it will impact Denmark’s shipping industry. Their exports will only be limited to the main markets. Real wage growth supports private consumption, job creation, and negative interest rates. It should underpin the increase in 2020, but the household debt is still a disposable income of 270%, which is the highest compared to other OECD countries.

Indonesia’s economy has a score of 67.2, which makes it 54th freest in the economic index of 2020. It is in the 12th spot among the 42 Asia-Pacific countries, with an above overall average. Its score is much higher than the regional and world averages.

Its economy has had a steady climb above the ranks of those that are moderately free since 2017. In the past five years, the GDP growth has sharply moved up.

The technologies and products of Denmark are aligned with the Indonesian government’s priorities. Therefore, companies and institutions, technology and expertise are equipped to handle the demands and challenges in Indonesia, and especially in these sectors:

Indonesia is part of the WTO, but foreign companies will encounter general market barriers and trade barriers like:

The agricultural sector in Denmark is where 1.4% of the GDP comes from, and 2% of the population work in this sector. About 60% of Denmark is for agriculture, and the country has over 50,000 farmers. That is why they are the top exporters of agricultural products, and they produce food enough for 17 million people.

The pharmaceutical, chemical, and biotechnology industries are also significant sectors in Denmark. Their natural resources are limited, which slows down the development of heavy industries. However, Denmark has an ample supply of oil and gas to ensure its energy dependence.

The service sector makes up almost ¾ of the GDP, and it employs 80% of the population. The banking sector in Denmark is solid, and a degree of concentration represents it. The domestic banks possess over 85% of Denmark’s total assets.

Mining is a significant sector in Indonesia, and it was mainly producing silver, bauxite, and tin. The government aims to expand to coal, copper, nickel, and gold for export. The production of coal has exponentially grown since their mines were opened again in 1993.

Manufacturing of Non-oil and gas is also a primary sector in Indonesia because they lead in motorcycle production, with over 8 million produced each year. The majority of components for manufacturing them are locally acquired.

Why Danish Companies Should Set Up a Business in Indonesia

Indonesia is the 16th biggest economy today and continues to become a famous business hub in the future. The markets offer higher returns on investment as their economy becomes even more prominent. It is one of the quickest developing economies globally and provides doors to organizations in different areas. Indonesia intends to add another terminal by 2021, which will be at Soekarno-Hatta International Airport in Jakarta. Organizations in developing division profits from contractual workers, planners, experts, and undertaking chiefs by interest.

Indonesia provides a diverse environment that makes it conducive for foreigners to work here. However, it depends on the situation: Jakarta, Bali, or the remote countryside and islands.

Moving to a circular economy is very important for sustainable development, and it is excellent that Indonesia takes the initiative to have this strategy. Also, the UNDP supports this step when businesses transition. The collaboration between Denmark and Indonesia has given Denmark a chance to find which sectors are currently the best in Indonesia.

It is essential to analyze both countries’ economies to determine why doing business in Indonesia vs. Denmark gives you the advantage. Aside from that, the cost of living in Indonesia compared to Denmark is a lot lower.

If you wish to set up a business in Indonesia, contact 3E Accounting to find the best experts who can help you get started.