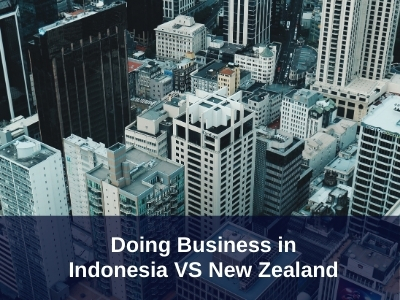 Human capital, economic performance, and corporate tax regime are among the important factors you have to look into in a country before putting up your business there. These are some of the factors that will gauge your decisions well. In Indonesia and New Zealand, they are showing favourable sentiments over the said factors. Let us discuss them in detail.

The Indonesian government is taking pride in honing its human capital. It is the main reason why it is among the priorities of the country. Indonesia is using a “whole-of-government” approach in providing nutrition services to millions of its people.

In addition, the World Bank is supporting the country’s Family Hope Program or Program Keluarga Harapan. This initiative is aimed at ending the cycle of poverty among the most vulnerable and poorest communities. The said program is providing cash assistance to beneficiary families used for the health services and education of the children, among others.

The Indonesian government, along with the World Bank, is also continuing its effort in improving the access of education to its people.

The government of New Zealand is making sure that it continues to develop human capital. By the country’s definition, human capital covers the following:

These factors are translating into employment, income, and housing, among others. Considering the public sentiment, the government agencies in New Zealand are factoring in human welfare when developing their budgets for this year. It is considered such a progressive move, which is only expected amid the changing times. In addition, the country is also putting an emphasis on having better access to education for everyone.

The country has been growing at an average of 5 per cent annually in recent years, according to data from Statistics Indonesia (BPS). BPS Head Suhariyanto stated that achieving the 5-per cent level growth was considered a triumph because the global economy was in a slump in 2019. The Indonesian economy was able to hurdle the impact of the trade tensions between the United States and China.

Looking at the contributing factors, Suhariyanto said that the 2019 economic growth was supported by robust household spending. This segment grew by 5.04 per cent in 2019 despite the decline in vehicle sales. In addition, investments—which is the second biggest contributor to economic growth—rose by 4.45 per cent. Meanwhile, government spending expanded by 3.25 per cent in 2019 as well.

In the first half of 2019, New Zealand saw its gross domestic products grow by 2.4 per cent. The economic growth was supported mainly by services industries, which rose 0.7 per cent in June of last year. Some of the drivers of this segment are the following:

However, private consumption in New Zealand also saw an uptick during the period. The country reached a new level of success in the first half of 2019 when its economy breached the $300-billion dollar mark in current price terms for the first time. To recall, the country spent nearly a decade to grow from a $200-billion economy to the current level.

The Indonesian government is allowing a tax reduction of up to 50 per cent for companies with annual gross revenue of less than IDR 50 billion. In addition, the corporate taxpayers whose revenues are below IDR 4.8 billion per year can also be given such a benefit under certain circumstances.

Meanwhile, corporations listed on the Indonesian stock exchange can avail corporate income tax reduction of 5 per cent, should they meet the requirements. The corporate tax rate in Indonesia stands at 25 per cent. The taxation is determined based on the residency and source of income. Therefore, a company incorporated or situated in Indonesia is deemed an Indonesian tax resident.

In New Zealand, the corporate income tax rate stood at 28 per cent. The tax returns are usually filed on the basis of the fiscal year ending March 31, but other periods are allowed after securing permission. When filing for tax payment, the companies are advised to compute their provisional tax the right way. With this, the government has provided the necessary guidelines regarding the matter. In 2020, the government introduced a research and development tax incentive scheme to promote such activities in the country. With a minimum expense of NZD 50,000 and maximum of NZD 120 million, the government will provide 15-per cent tax on related costs.

Indonesia and New Zealand both understand the importance of investing in human capital and the welfare of their people. They know that keeping their people healthy and well-educated can translate to better economic performance. Indeed, both countries are prioritizing the development of human capital according to the policies they are implementing.

Professional Team Looking Over Your Taxes and Returns

When you are running and maintaining a business, you are looking at several aspects to keep your company’s welfare. This includes filing for tax payments, which is among the regulatory requirements in any country. You might need professional help on the matter, especially if you have no idea regarding the tax regime of a specific country.

Hiring a firm for corporate tax compliance services in Indonesia might be the best option for your business. If you agree, 3E Accounting is definitely the perfect fit for your company. We are providing excellent taxation services, in addition to accounting and business advisory. Contact us today. Our team is more than happy to help you and your company in every step of the way.