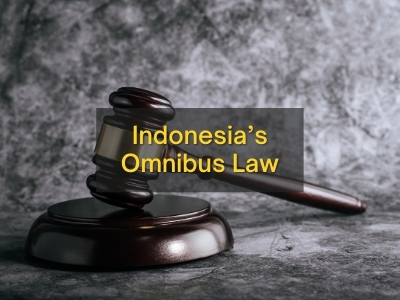 3E Accounting explains Indonesia’s Omnibus Law and how this forward-thinking initiative is set to change the economic landscape.

For the first time in 20 years, Indonesia’s economy is undergoing a recession. Southeast Asia’s largest emerging economy is floundering on the shores of a shrinking economy. In an attempt to counter this, the Indonesian Government has passed a bold initiative known as Indonesia’s Omnibus Law.

The Omnibus or Job Creation Law was ratified on the 5th of October and signed into legal effect on the 2nd of November 2020. It is considered a contentious and controversial law by most citizens and has faced stiff opposition from unions, organizations and environmentalists. The reason for their angst ranges from loss of minimum wages to the removal of strict liability clauses in environmental issues.

The Omnibus law was initiated with the following aims in view:

It is seen as a comprehensive economic reform, with 186 articles which consolidates 76 statutes across various industries into one law. In doing so, it will eliminate 4,451 central and 15,965 regional government regulations.

The Overall Guiding Principle of the Omnibus Law

The overall guiding principle of the Omnibus law is to make Indonesia attractive for investors and businesses alike. As a result, regulatory and compliance requirements are being eased and streamlined in several sectors. Also known as clusters, they consist of eleven areas:

Foreign investors looking to set up business and investment in Indonesia should be aware of the following changes brought about by the law. Primarily, business licensing will be simplified even more via the Online Single Submission (OSS) system. Licensing will be issued on a risk-based-approach system. High-risk businesses need a full license, while medium-risk only need a registration number. Low-risk companies will no longer need a business license.

Tax regulations will be unified under one regulatory framework which will bring with it many incentives. Corporate income tax and interest tax will see a gradual reduction in rates. Further, provided the full re-investment is done in Indonesia, dividend payments will be made income-tax free. Labour laws will also be revised and made more flexible to encourage more foreign investors.

Indonesia’s Omnibus Law has the potential to drive the growth of Indonesia’s gross domestic products (GDP) by increasing exports and foreign direct investments (FDI). It can also spur supply chain manufacturing, and logistics as multinational companies (MNCs) look towards diversification to keep labour costs down. However, it will all hinge on how the reforms are synchronized. Done well, the omnibus law can bring about long-term economic development and recovery.

Contact 3E Accounting for the latest in business news and regulations.