Doing Business in Indonesia VS France

Considering Setting Up a Business in Indonesia VS France 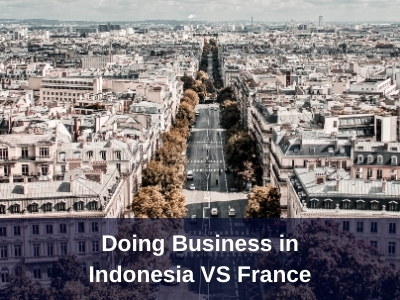 If you are a foreign investor, researching a prospective location for your business setup is a must. Indonesia and France are among the countries wherein investors are flocking in to put in their company and generate profits from the operations. Even, both countries have been welcoming to foreign investors as shown by their economic data. Let us examine Indonesia and France as your potential investment destination.

The foreign direct investment (FDI) flows into the country have been growing because of its robust economy, manageable government debt level, and prudent fiscal management. According to the World Investment Report 2020, the Asian country’s FDI surged by 14 per cent to $23.4 billion in 2019 from $20.56 billion in the previous year. Also, FDI stock climbed to $232.61 billion for the same period. The improvement in FDI level was credited to the economic policies being implemented by the Indonesian government. Among these are the following:

According to the World Investment Report 2020, France saw its FDI flows declined by 11 per cent to $34 billion in 2019 from $38.19 billion in the previous year. The report blamed the drop to the lower cross-border merger and acquisition sales of assets. Still, FDI stock increased to $868.69 billion as of end-2019. France is considered a strategic geographical location at the heart of Western Europe, making it attractive for foreign investors. It has one of the leading infrastructures and public services, along with a highly skilled and productive labour force. In addition, France is deemed to be business-friendly and has a stable legal framework.

In 2019, Indonesia recorded merchandise exports amounting to $167 billion. Accordingly, its top exports for that year were coal, briquettes, ovoid, and similar solid fuels from coal production. They accounted for 11.2 per cent of the total exports, representing $18.8 billion in revenues. Following this is palm oil at 8.76 per cent or $14.6 billion in revenues. Other top exports are petroleum gases and other gaseous hydrocarbons, motor cars and other motor vehicles, gold, natural rubber, and flat-rolled products of stainless steel.

The country exported goods amounting to $555.1 billion across the world in 2019. Occupying most of the outbound shipments were machinery and computers. Also, they comprised 12.1 per cent of the total exports, translating to $67.3 billion. After them, the export goods that gave the highest revenues are aircraft and spacecraft ($53.5 billion, 9.6 per cent) and vehicles ($52.8 billion, 9.5 per cent).

Other top export goods are electrical machinery and equipment, pharmaceuticals, plastics, perfumes and cosmetics, and beverages and vinegar, among others. Majority or 64.3 per cent of the country’s outbound shipments were delivered to European countries while 17.4 per cent were sent to Asia.

Setting Up Business: Indonesia VS France

If you are setting up a foreign-owned limited liability company, it usually takes two to six months to set up your business in Indonesia. Furthermore, for this type of business, the minimum capital requirement is IDR 10 billion (roughly $675,000). Of this amount, 25 per cent or IDR 2.5 billion ($170,000) should be deposited in advance. However, if you are foreign investor eyeing to penetrate a capital-intensive industry, you might be needing higher minimum capital and paid-up capital requirements.

In the process of incorporation, the Indonesian Law is mandating the company to have an office and a document validating the existence of such an official workplace.

There are different kinds of business entities that you can set up in France, including limited liability company, joint ventures between a French firm and a foreign firm, and a stock corporation. France is very much accommodating when it comes to company incorporation, just be more cautious if you are in the banking and insurance industries. Also, make sure that your financial reports are in place to avoid tax problems. Previously, the share capital required for a limited liability company amounted to €7,500. It has been reduced to €4,000, which made the French economy more welcoming to investors.

Summarizing the Indonesia VS France comparison

As mentioned, both countries are major foreign investment hubs, showing billion-worth of pledges and projects in 2019. The additional foreign investments allowed Indonesia and France to have diverse and vibrant industries, thanks to their continued accommodative policies. In addition, both countries are making strides toward a more business-friendly landscape to maintain their momentum.

Being welcoming to foreign investors, it is no wonder that both countries have thriving export industries as well. They have been tapping the foreign markets as much as they can. On other hand, in terms of setting up a business, Indonesia and France are setting clear frameworks to avoid confusion.

Looking for a Professional Help?

Setting up a business from the ground up takes a lot of effort and expertise. However, having a team of professionals supporting you can make all the difference. After all, you want what is best for your dream business. You want to turn it into reality as smoothly as possible.

If you need help with your business license application, reach out to 3E Accounting. We are ready to accommodate you and your company. Contact us today.