Doing Business in Indonesia VS Philippines 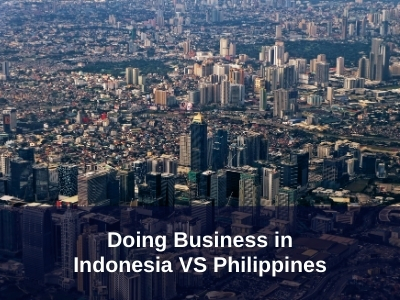 Indonesia has 17,000 islands that spread between the Indian and Pacific Ocean, with over 200 ethnic groups. There are over 300 spoken languages that bridge the Asian and Australian continents. There are beautiful landscapes and biodiversity that stretches over the equator.

The fame of Indonesia as a tourist destination is because of the abundant natural resources and biodiversity. The lush tropical forests, marine life, diverse species, and fascinating people make it an attractive country to anyone, even investors.

The Philippines is a nation with more than 7,000 islands, making it another archipelago in southeast Asia between Borneo and Taiwan. The country serves as an entry point to 500 million people in the ASEAN, and it is a gateway to many international shipping companies and air lanes. American and European businesses use these air lanes.

Find out more about doing business in Indonesia VS Philippines.

The economic freedom score of the Philippines is 64.5, making them the 70th freest in 2020. The overall score went up by 0.7 points, mainly because of a government integrity score that is higher. The Philippines ranks 14 among 42 countries in the region of Asia-Pacific, and it scores well above the world and regional averages.

The economy of the Philippines has stayed moderately free for seven years in a row. The GDP growth already boomed as well, which averages more than 6% over the last five years. Despite the challenge brought by COVID-19, growth is expected to rebound by 2021-2022. This is if the global containment of the virus works, with a robust domestic activity powered by higher consumer and business confidence and momentum of public investment.

Indonesia is the largest country in Southeast Asia, with all kinds of natural resources and cultural diversity. With a young and dynamic democracy, it is rapidly urbanizing and modernizing. About half of the Indonesian population is not older than 30 years old. The ratio of the working population is expected to rise over the next decade.

Since the 1998 Asian Financial Crisis and Global Financial Crisis, Indonesians’ living standards are a lot higher compared to before. They also have a more resilient economy. The GDP per capita rose by 70% over the last two decades. When the commodity ended, the price boom went down to incomes and government revenues. The GDP growth stayed at 5%, and per capita income annually increased by 4%. The poverty rates fell in the urban and rural areas. The credit rating agencies recognize the prudent macroeconomic policies and structural reforms progress. Also, Indonesia’s international competitiveness ranking and business environment improved.

The Philippines’ business environment is grounded on personal relationships, with business matters best-done face-to-face in a pleasant and warm atmosphere. Filipinos are not direct and enjoy exchanging pleasantries, laughing with friends and family before starting the meeting. To a Filipino, friend cultivation, having a valuable contract, and developing rapport get businesses moving.

Meetings normally start later than what was agreed upon. Other cultures find this strange, but it is common in their local scenery. The truth is, if the business partner is more senior, there is a higher chance, they are late.

If the humidity is high and intense, there is no need to wear a suit. For males, a long-sleeved shirt is enough. Women can wear pants or a skirt paired with a dress shirt or wear a dress.

The approach of Indonesians to business is mainly based on relationships. They normally select and promote based on the family and relationship lines instead of performance criteria.

During the initial contact, it is advisable to have a third party introduce you. They should be chosen carefully and remember to meet the person with the highest rank first. Indonesians do not always answer emails, messages, or phone calls, so personal visits are basic.

In Indonesia, there is such a thing as “rubber time.” That means they have a flexible approach to time. Their meetings can start late or finish late. Most of the time, the meetings are unstructured, and they do not have a clear plan to follow.

Greetings are formal because they show respect, and the most common greeting is a handshake. Many Indonesians, especially the Muslims, greet one another by bowing with one hand on their heart. Always start greeting the most senior person and then the others.

Why Open a Business in Indonesia VS Philippines?

Filipinos do not have a hard time working in Indonesia because they have great relations with the ambassador. That is because of the personal ties that date back 65 years ago. Their diplomatic relations cover many areas like security and defence, humanitarian and response to disaster risk, tourism, energy, and counter-terrorism.

Since Indonesia and the Philippines are founding members of the ASEAN, they work closely on issues. They are both major trading partners, and there is a lot of potential in their business association. Indonesia has a larger market in comparison to the Philippines. That means there is more room for introducing your new product and finding the right market for it. Besides, Indonesia is expected to be the next economic giant in Asia because of its consistent growth over the years.

The investment, tourism, trade, economic, and business relations between the organization firms will become stronger. There is also a lot of information exchange on trade and investment while assisting them in landing business contacts through conferences, events, tours, etc.

If you want to establish a business in Indonesia, the best thing is to contact 3E Accounting because they have a lot of options. You can even set up a virtual office with their help.