Doing Business in Indonesia VS Japan

Things to Consider When Opening Business in Indonesia VS Japan 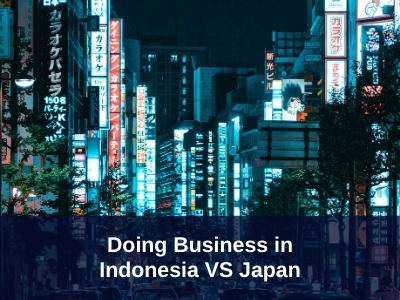 When you are setting up your own business, you need to know that the process will be reasonable. So, before doing it, you will be studying all the procedures required. Among the things you need to know are the process of opening a corporate bank account and the initial cost of starting your own business. These are fundamental factors in turning your dream business into a reality. In addition, you would like to know the economic position of the country where you are visiting.

According to the regulation of the Central Bank of Indonesia, the newly formed foreign company should accomplish its banking transactions via a special foreign investment bank account. These transactions include capitalization and loans, among others. To open an account, the bank is requiring the initial investment approval, deed of establishment, passport, power of attorney to the person who has the authority to open the bank account, and the minimum deposit.

The initial minimum deposit is IDR 1 million, but each bank is setting its own requirements. Opening a bank account is taking five days. You can open a checking account, savings account, and deposit account, all of which are usually needed when opening a company. In addition, investors can transfer funds in and out of the country at no cost. But should the amount of money being sent be more than $10,000, the company should report it to the Central Bank. Meanwhile, Indonesia is not requiring prior permits when transferring foreign exchange.

To open a corporate bank account in Japan, the financial institutions will be asking for your company registration form, Hanko (stamp) for the company, and personal identification such as the passport. Prior to the application, it is best for you to transfer 5 million yen in your personal bank account. After this, prepare for several questions from your bank. The financial institutions are reviewing applications to make sure your company is not involved with money laundering. Some of the questions are about the reason behind opening the account, the type of business you’re operating, and the source of your company’s income.

Initial Cost of Setting Up a Business: Indonesia VS Japan

Like in any country, foreign investors need to put up a certain amount of money to establish their business. In Indonesia, around $60,000 is needed. This covers the acquisition of standard form of the company deed, clearance of company name, notarizing of company documents, approval of the deed of establishment, permanent business trading license, and company registration certificate. When opening a business, investors are dealing with the Ministry of Law and Human Rights, State Treasury, Ministry of Manpower, and one-stop service providers, if needed. Apart from this, businesses should also apply for Workers Social Security Program if they are employing at least 10 workers.

According to the Companies Act of Japan, the minimum investment when building a business is 5 million yen or around $45,000. This, after securing the Business Manager visa status. Apart from the investment, the foreign investor should at least employ 2 full-time workers and open the company’s place for business to achieve this visa status. Meanwhile, the Tokyo Metropolitan Government has begun accepting applications for the Startup Visa Program which offers entrepreneurial incentives for foreigners. Japan has been implementing programs to promote the increase of foreign entrepreneurs in its national strategic special zones.

The pace of Economy: Indonesia VS Japan

According to data from Statistics Indonesia (BPS), this Asian country has been growing at an average of 5 per cent annually in recent years. BPS Head Suhariyanto said in an interview that achieving the 5-per cent level growth was deemed a success because the global economy faced many challenges in 2019. Amid the intricacies, the Indonesian economy was able to hurdle the impact of the trade tensions between the United States and China.

Looking at the contributing factors, the 2019 economic growth was supported by strong household spending or private consumption. This segment grew by 5.04 per cent in 2019 despite the decline in vehicle sales. In addition, investments—which is the second biggest contributor to economic growth—rose by 4.45 per cent. Meanwhile, government spending expanded by 3.25 per cent in 2019 as well.

In 2019, Japan saw its real gross domestic products grow by 0.7 per cent. The economic growth was supported by the different reforms implemented by the Japanese governments. These include fortifying corporate governance, trimming the corporate tax substantially, enhancing women’s participation and advancement, and inviting more overseas talents. In addition, the government also implemented policies on reforming agricultural policy through increasing farmers’ income and promoting foreign trade to tap international markets. All these made the Japanese economy healthy throughout the year.

Summarizing the Indonesia VS Japan comparison

Both Indonesia and Japan are promising to be excellent investment destinations. They are both placing regulations over the opening of bank accounts for foreign companies. After all, it’s only necessary to make sure that both the company and the local bank are safe and protected from unwanted risks. In addition, the countries are also welcoming foreign investors, requiring a reasonable amount to build up their companies. Such policies are important to maintain a good amount of liquidity in your business even before starting your operations.

Looking at economic performance, both countries are showing growth, which is very compelling for investors. A growing economy means there is also a good amount of demand from the public. This will translate to a stable market and income generation. Both governments are also taking the extra mile in improving the economy.

The Professional Help You Need for Company Incorporation

When you are incorporating a business, there are a lot of requirements to be accomplished and submitted. Doing it alone can be very tiring—and the result can be prone to mistakes as well without supervision. You might need a helping hand to guide you through it all.

In securing your Indonesia certificate of incorporation, do not hesitate to reach out to 3E Accounting. We are an excellent team of highly skilled professionals. We are offering a wide array of services including corporate secretarial, accounting, and taxation. Contact us today.