Going for Public Listing in Indonesia

Trying to List a Company? Learn How Public Listing in Indonesia Work 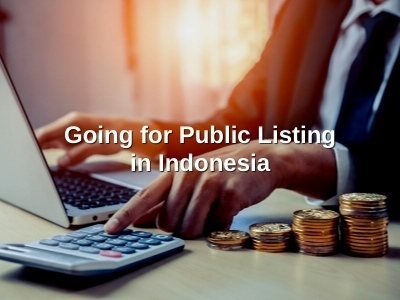 Plenty of big companies that we see today started with a humble beginning. As time passed, those companies have experienced growth and have evolved to become a stable company. But for some who wish to become a major corporation, it does not stop there. Taking a leap and turning one’s private company into a public listed company is a huge decision – that has both its pros and cons. Are you curious to know what it means to be a public listed company in Indonesia? See more on Going for Public Listing in Indonesia below.

In Indonesia, the main stock exchange market is the Indonesian Stock Exchange, better known as ‘IDX’. The stock market is regulated by the Financial Services Authority of Indonesia (OJK), which replaced BAPEPAM-LK (Badan Pengawas Pasar Modal dan Lembaga Keuangan) in 2011. The OJK was introduced to regulate, supervise and inspect financial markets in Indonesia. All financial institutions (including financial markets) and their activities must comply with legislation pieces such as the No. 8 of 1995 on Capital Markets (Capital Markets Law) and Law No. 21 of 2011 on the Financial Services Authority.

‘Going public’ is a process referred to when privately-owned companies transition to public listed companies. It also refers to the Initial Public Offering (IPO), which is the first time the company sells its stock to the general public. The company, also known as the ‘issuer’, offers its shares to the public with investment banks’ help. These banks act as the intermediary between the company and the people – the banks will be responsible for finding suitable buyers, investors, providing underwriting services, and advising the company on financial matters.

Public listed companies’ are publicly owned and traded. Contextually, publicly owned here means that the company’s ownership, which was in the past, was autonomously held by the founder, has shifted to the stockholders. Although with that being said, the founder still has control, albeit minimal powers, whereas the Board of Directors has more significant operating and decision-making powers. A prime example of a publicly listed company is airlines. Given how these businesses are capital-intensive based, they require lots of money to run. Therefore, they rely on the public for capital gains.

Why Do Some Company Choose to Go Public?

Going public has numerous benefits; however, it is not risk-free. In fact, it comes with a few downsides as well. See below for the pros and cons of a private company going public.

Any company, regardless if they are new or old, can go public. Nevertheless, the decision of switching to become a publicly listed company should be made after one is thoroughly informed of the matter and its consequences. If you’re not too sure whether to go public or not, you can always reach out to a corporate attorney and ask for their insight. An experienced corporate lawyer would be able to answer your inquiries and provide further clarity on companies going public.