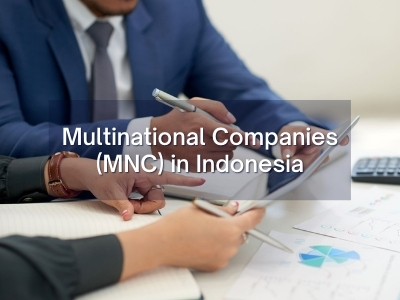 Due to globalization, the presence of multinational corporations has grown exponentially in both developed and developing countries. They tend to set up operations in countries with large market populations. While Indonesia is currently ranked 73rd on the World Bank’s Doing Business Index, the Government has made it a priority to better this ranking. The new Omnibus Laws, as well as other regulations, are aimed at streamlining approvals and encouraging foreign direct investment (FDI). As such, multinational companies (MNC) in Indonesia are on the rise.

Just like India, MNCs in Indonesia have a very long history. The first MNC in Indonesia and the second in the world was the Dutch East India Company, which monopolized the spice trade. Indonesia has come a long way since then. Currently, the top 45 largest MNCs include global firms such as Unilever, Astra International, Exxon Mobil, Bank Mandiri, Global Mediacom, XL Axiata, etc.

MNCs are characterized by the way they do business. They are usually headquartered (HQ) in one country, called the ‘home’ country, and the absolute majority of directors originate from here. More than half of the capital assets are also to be found in the home country. MNCs then manage operations set up in other countries, known as the ‘host’ countries, from their HQ. Some MNCs, such as Google, for example, can grow to be substantial global concerns that generate enormous amounts of revenue.

MNCs come with their pros and cons. They are known to exploit developing countries for their cheaper and abundant resources, such as labour and materials. MNCs also tend to favour countries where the laws and regulations are a bit lax. On the other hand, they contribute significantly to a country’s economy and offer employment to thousands. MNCs also facilitate the transfer of technology, which then raises the standard of living of a nation.

MNCs are usually found in manufacturing, service, or trade sectors and are characterized by the highest revenue source. Due to the nature of their operations, some of the more popular MNCs are usually joint ventures or branch offices. These are easier to incorporate and have the least compliance issues. More elaborate versions include affiliates, subsidiaries, or transnational companies. They are defined by the percentage of interest controlled by the parent or foreign entity.

3E Accounting offers premium, bespoke business solutions for the discerning entrepreneur. Whether you’re incorporating multinational companies (MNC) in Indonesia or starting a business with one, 3E Accounting has a solution for you.

Contact 3E Accounting today to create a path towards the best professional solution for your business.