Indonesia is Encouraged to Have Fair Regulations for Foreign Investors 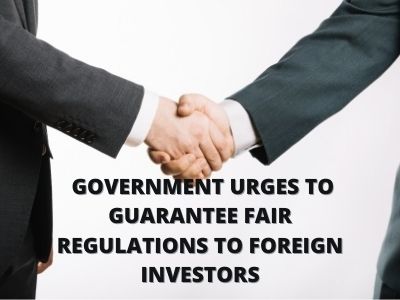 Senior legislator Rachmat Gobel calls for fair regulations for foreign investors to attract more business ventures in Indonesia. By having such, the country can also see improvement in the quality of the investments being approved.

Gobel expressed his sentiments toward foreign investors’ regulations after Japanese Prime Minister Yoshihide Suga came to Indonesia for a state visit in October 2020.

Meanwhile, during his visit, Suga showed a high interest in monitoring both countries’ cooperation in different fields. Japan has recently funded infrastructure projects in Indonesia.

Serving as the deputy speaker of the House of Representatives, Gobel also mentioned that the fair regulations to foreign investors have been vital to keeping a harmonious relationship with countries, including Japan.

Such partnerships have become strategic, he added.

The foreign investments are strengthening the Indonesian economy and aiding the country to resolve concerns as it moves into the Fourth Industrial Revolution, Gobel explained.

Forming a Stronger Partnership with Japan

Japan is currently one of the most prominent foreign investors in Indonesia. Japanese investors are contributing to the oil and gas industries, among others.

In terms of exports, Japanese firms’ contribution to outbound shipment to Indonesia’s total exports to global markets was 24.4 percent.

At the same, Japanese companies are also employing 7.2 million workers. The majority or 90 percent of them organize training programs to help the workers and professionals.

For the infrastructure sector, Japan has also contributed to the construction of 17-gigawatt power plants in Indonesia.

Besides, Japan also helped Indonesia in human resource development. The Japan Student Services Organization noted that the number of Indonesian students in Japan has grown by two times over the past five years.

The Indonesian government has been making strides to implement more permissive regulations for foreign investors.

It has been tackling an omnibus bill seen improving foreign investments and job creation, which are necessary to lift the economy amid the coronavirus pandemic. The ongoing health and economic crises have been making it hard for businesses to operate, affecting the economy’s pace.

On October 8, the House of Representatives Legislation Body and the government passed into law the omnibus law on October 8, 2020.

The law is necessary after the Indonesian economy contracted by 5.32 percent in the second quarter of 2020. It is expected to register its first economic plunge in the last two decades or since the 1998 Asian financial crisis. On the other hand, the government is setting a 5-percent economic growth in 2021.

According to the Investment Coordinating Board, foreign direct investment slipped by 6.9 percent to RP 97.6 trillion in the second quarter year-on-year due to the coronavirus pandemic.

If your company needs business solutions services, reach out to 3E Accounting. Our dedicated team is ready to help your company every step of the way. We have the best accounting professionals equipped with the right skills. Contact us today.