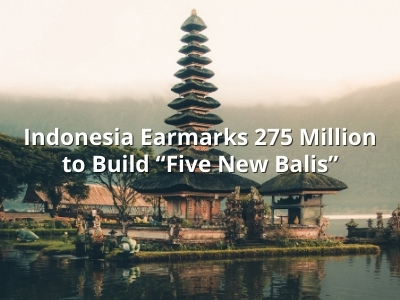 Indonesia’s Government is preparing to spend Rp 4.01 trillion (US$275.15 million) in 2021 in five areas (the five new Balis) that have been identified as priority tourist destinations.

Indonesia’s Public Works and Housing Ministry (PUPR) says roads, clean and raw water supply, residential improvements, sanitation, and waste management were among the plans in the works. The funds are allocated for 108 infrastructure projects. These projects will be built in the priority tourist destinations in an effort to boost tourism.

The five priority destinations are called the “five new Balis”. PUPR plans to improve the amenities and infrastructure to promote events in the area. This is to ensure tourists will continue coming back to the area, hence the plan to change the face of the region. The five new Balis are Labuan Bajo in East Nusa Tenggara, Lake Toba in North Sumatra, Borobudur in Central Java, Likupang in North Sulawesi, and Mandalika in West Nusa Tenggara.

With upgrading happening in a fast and integrated manner, it will impact the local and national economy. Indonesia’s Government is hopeful these five new Balis will boost the contribution to the tourism sector. It also hopes that the economy will be given a 12% boost in GDP within the next 10 years. With the help of Bali and these five new locations, Indonesia is hoping the tourism industry will recover this year.

When Indonesia’s tourism recovers, its economy will only grow stronger. The country is confident it will once more become the thriving tourism and entrepreneurial hub it was before the Covid-19 pandemic. Indonesia company incorporation has always been a strong contributor to the country’s economy and it will continue to grow once investors and businesses pick up momentum again.