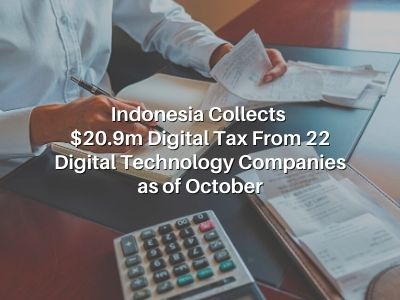 Under the recently-changed digital tax, Indonesia has garnered Rp 297 billion (US$20.9 million) from 22 digital technology enterprises, according to the Finance Ministry’s Taxation Directorate General on Monday.

Aiming to implement the taxation to digital business movements in the country, the tax office has assigned numerous value-added tax (VAT), collectors. Most of the appointees came from dozens of technology companies and e-commerce industries.

The Taxation Director foresees an uprise of up to 10 per cent in the upcoming months from the VAT obtained from foreign goods and services offered by large tech firms. The expectation comes after the office aimed to designate more enterprises as VAT collectors.

A Significant Boost in Numbers

Blibli.com, Bukalapak, Lazada, Tokopedia, and Zalora rounded up the list of other e-commerce platforms included in the VAT collectors. Moreover, the tax office also clarified that these platforms would only obtain VATs from foreign merchants that offer foreign goods and services.

Last November 17, the Finance Ministry’s Taxation Directorate General assigned an additional 10 VAT collectors consisting of personnel from different digital technology companies. Under the stipulated obligation of a VAT collector, they are tasked to compile 10 per cent VAT from foreign goods and services they offer in compliance with the digital tax Law No.2/ 2020.

The government shifted to tax digital tech firms that offer no physical presence but have a major economic impact, as evidenced by Indonesia’seir business transactions. After all, the movie was a triggered impact brought by the declining tax revenue and a massive shift of consumers to online platforms at the height of the pandemic.

Numerous states are already eyeing digital tax schemes in order to ensure that colossal tech firms are obliging to the tax regulations as they garner massive amounts of earnings in the local scene.

The Taxation Directorate General already said in the past that the office is having discussions with various digital service providers that are set to take up the VAT collecting jobs.

“We are currently focusing on improving the implementation of the digital tax, as well as on discussions with more foreign digital companies that will be subjected to the tax,” the Taxation Directorate General told the Jakarta Post.

Meanwhile, an economist at the Institute for Development of Economics and Finance (Indef) expects that the VAT for digital goods would only make up less than 10 per cent of the Rp 546 trillion VAT collection envisioned for 2021. Some companies have been reaching out for Tax services in Indonesia to accompany them with the taxation system.