Subsidy for EV Buyers to Be Given by the Government 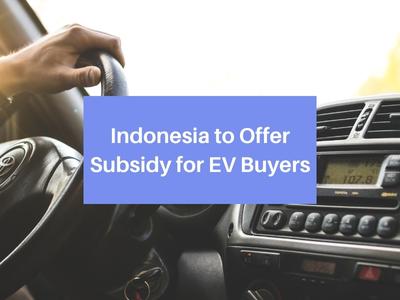 The Indonesian Government is taking massive steps to encourage its citizens to purchase electric vehicles (EVs). According to the Industry Minister, buyers will receive a subsidy to purchase EVs, such as electric motorbikes and hybrid cars from locally-made factories.

Jokowi plans to triple the number of EV sales in the upcoming seven years. Apart from the Government’s effort to reduce carbon emissions by adopting EVs, the subsidy also targets to catalyse foreign investment in the country. Additionally, the President is aiming for an end-to-end EV supply chain store in Indonesia. Indirectly, the efforts will also reduce the Government’s load of subsidising 44 billion dollars on gasoline prices. Following the attempts to keep fuel prices low after protests in the country, the fuel subsidy has taken a sizable portion of the state’s budget.

The Ministers, however, are yet to touch on how much local content a vehicle must possess to be eligible for the subsidy. Given that not all EVs and hybrids are not 100% local, there has to be a pre-determined Domestic Component Level for each vehicle. Indonesia consistently ensures that the EVs will continue to contain more domestically sourced parts. Operating in Jakarta, Hyundai Motor Co. will be using batteries made locally soon. On the other hand, Toyota Motor Corp and Mitsubishi Motors Corp will produce more EVs and hybrid vehicles locally in the upcoming years.

First implemented in Jakarta, tax cuts on EVs and hybrid vehicle sales started in 2019. Determined to drive economic growth, the country is pushing towards developing EV and battery factories in their homeland. Indonesia’s industrial policy of banning nickel ore export was reimposed in 2020. Originally, it was first banned in 2014 and later relaxed after the country experienced a budget deficit.

In the near future, the Government foresees having 1.2 million electric bikes and 35 000 EVs on the road – by 2024. As of now, there is yet to be an indicative timeline of when the subsidies will be put into action. However, the Senior Minister has mentioned that the scheme may begin in 2023. Given the current climate state, there is an imminent cause to move towards sustainability. The global demand for nickel used in EV batteries is on the rise; Indonesia is predicted to become the world’s biggest supplier of nickel ore soon.