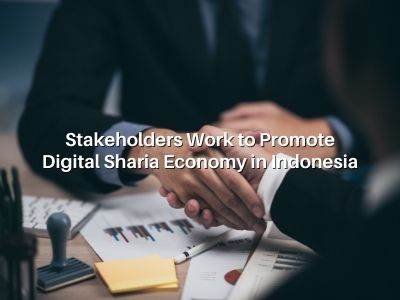 Through promoting the services in Indonesia, Islamic fintech and finance institutions announced their goal of improving the community’s awareness of the digital sharia economy. The potential of the society in the industry was considered.

A BWI survey showed that Indonesians only reached up to 50.4 on waqf (religious endowment) literacy. According to the Indonesia Waqf Board (BWI) vice-chairman, unexplored waqf products and services impacted most Indonesians’ lack of understanding.

The vice-chairman explained in a webinar hosted by the Indonesian Fintech Association (Aftech) as part of Fintech Week that the literacy rate was acknowledged to resolve the issue. The adaptation of blockchain in cash-based waqf would accelerate the national ecosystem—these reasons out the attempt to increase waqf awareness to most institutions.

Despite being the country with the fourth-largest population globally, Indonesia falls behind other countries in terms of financial services. The presence of a digital Sharia economy in the country appears extremely lower compared to countries Bahrain and Malaysia.

Moreover, as estimated by the Boston Consulting Group (BCG), the country has the largest Muslim population with over 64.5 million middle-class Muslims in 2020, remarking an opportunity for the digital sharia economy.

However, the Financial Services Authority (OJK) data shows that sharia’s financial literacy rate fell only 8.93 per cent in 2019. The market share was less than 10 per cent overall. Slow progress is observed as per changes made by Sharia FinTech companies centralized out of 127 FinTech corporations registered in Otoritas Jasa Keuangan (OJK).

Meanwhile, Accounting System Setup in Indonesia was established to improve business transactions and comply with the Indonesian Financial Accounting Standards Board (IFAS).

Expansion of the Sharia finance region has accommodated the increase in financial inclusion in other areas. The Sharia FinTech industry emphasizes certainty on influencing society in the following years.

According to Deloitte, on Boosting Financial Inclusion through Sharia Economy in Indonesia, established partnerships of advanced technology, excess financial inclusions, and consumer preparation to comply with the new business services would enhance the financial industry of the country.

The observed opportunities have led to relations on how big the potential is within Indonesia. As the president established Komite Nasional Keuangan Syariah (KNKS), encouragement to financial inclusions was renowned. Development and series of Sharia regulations were promoted to induce an environment of the secured base for FinTech players.

Overall, most Sharia-focus FinTech businesses’ mission is to delimit the Muslim community’s financial gap by generating growth and stabilizing the country’s economy. Easy banking and financial transactions are recognized. People would receive a dynamic impact when funds through different platforms are effectively accessed.