Indonesia Has Amended 79 Laws to Boost Investments and Jobs 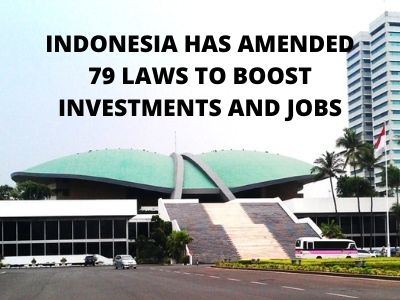 The Indonesian House of Representatives passed the landmark Omnibus Law on Job Creation on October 5 to improve the business climate. The government has amended 79 laws to boost investments and jobs, making Indonesia more competitive and attractive as an investment destination.

According to the World Bank’s annual survey on Ease of Doing Business, Indonesia has shown improvement in recent years. Still, it sits at 73rd rank out of 190 countries in 2020.

Besides improving Indonesia’s business landscape, the omnibus law aims to reduce the red tape and make the land acquisition process simple. Simultaneously, it is easing foreign restrictions on investment and extending more incentives to free-trade zones, among others.

Many international manufacturers have been scouting locations to diversify supply chains. This, as the labor cost in China, increases, and its trade tension with the United States continues to escalate.

While some firms have relocated to Indonesia recently, People still believe that the business environment has improved further.

According to a survey by the Japan External Trade Organization (JETRO), Indonesia’s annual salary levels for manufacturing workers averaged at $5,956 in 2019. It is lower compared to the wages in China, Thailand, and Malaysia. Meanwhile, it is higher than the salaries in India, Vietnam, and the Philippines.

The Fitch Ratings welcome the amended laws to boost investments and jobs. The debt watcher said that the omnibus law is supporting Indonesia’s long-term economic plans.

The anticipated surge in manufacturing exports and inflows of foreign direct investment can also help Indonesia finance its current account deficit. This as it lessens dependency on commodity exports and portfolio flows.

Still, the laws’ impact on boosting investments and jobs will be felt in the long term. Also, Fitch Ratings said the reforms are unlikely to prompt changes for the country’s BBB rating in the near term. It is noted that a stable outlook was affirmed earlier this year.

Cutting the Severance Pay of the Employees

Lower costs can, indeed, attract foreign investors. By reducing the severance pay, more are expected to put up operations in Indonesia.

The new law says that the maximum severance pay will be cut to 25 months from 32 months previously. The companies will shoulder a big part of —19 months—of the wages. The remaining six months are coming from the new unemployment insurance scheme launched by the government.

Still, the new severance payment scheme is relatively higher compared to Indonesia’s neighbor. For example, in Vietnam, severance pay amounts to half a month of income for every year of service rendered for the company.

This seems to unlock the potential of Indonesia’s labor force. Half of its 270 million population, according to reports, is under the age of 30.

Besides, the new law can protect the workers should it be enforced appropriately.

Professional Experts for Your Company Needs

If you need help in employee recruitment in Indonesia, reach out to 3E Accounting. We are a corporate service provider equipped with the right skills and expertise to address your every need. Contact us today.