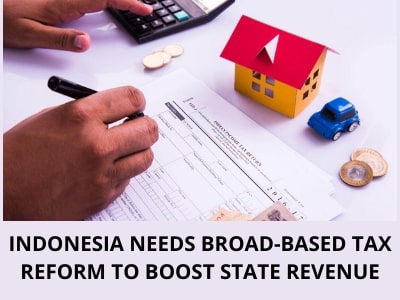 The International Monetary Fund (IMF) is encouraging the Indonesian government to implement a broad-based tax reform as a means of improving its revenue as the economy slows down due to the coronavirus pandemic.

In an interview with The Jakarta Post, IMF mission chief for Indonesia Thomas Helbing said that a medium-term revenue plan focused on raising 5 percent of the gross domestic product could truly alleviate the current situation.

The need for broad-based tax reform came following Indonesia’s move to slash the corporate income tax. Its government has trimmed the said tax from 25 percent to 22 percent in 2020. In 2022, it is planning to further reduce this to only 20 percent.

Amid the pandemic and economic slump, the cut on the corporate income tax was seen to help the business community stay afloat. Keeping the businesses—especially the micro, small, medium enterprises—up and running is seen as lifting the economy to reach the point of recovery.

However, the cut on corporate income tax could possibly affect the revenues of the country. Lowering the tax base means a potential decrease in the collection as well.

With the help of a digital tax policy, the government can collect value-added tax on taxable intangible goods or services offered by technology businesses. This, like Indonesia, laid out plans to tax e-commerce firms owned by foreign entities and digital firms that have established market positions.

Such a move was in place to somehow temper the revenue cut from lower corporate income tax. Still, the IMF was not convinced it could be done.

Helbing stressed that the recently introduced digital tax policy is not enough to prop up the country’s revenue channels. At the moment, the digital transactions in Indonesia were still at relatively low levels, the IMF explained.

Attracting More Investments in the Country

While broad-based tax reform was a necessity, the trimming of corporate income tax was also imperative, according to the government.

Moreover, the government is eyeing to make the business climate in Indonesia more welcoming to attract additional foreign investments.

It is deemed important because the country registered an economic growth of only 5.02 percent in 2019. This rate is the lowest in four years. With the world struggling due to a major economic downturn, the IMF forecasts the country’s gross domestic products to decline by 1.5 percent in 2020.

Watching Out for the Budget Deficit

A broad-based tax reform, as mentioned, can help improve the revenues of Indonesia. Further, the government is seeking better cash flow as it aims to make its budget deficit narrowed.

Through its policies, Indonesia is now making a move to cut its budget deficit and national debt. Its government is hoping to bring down the figure to 3 percent by 2023 from the expected 6.34 percent in 2020 and 5.7 percent in 2021.

To recall, the national government’s debts surged amid the pandemic as it launched an economic stimulus package.

Indonesia collected RP 1.15 quadrillion of state revenues as of September. This is a 13.7-percent decrease year-on-year.

Need Help from the Expert?

If you need Indonesia withholding tax services, do not hesitate to reach out to 3E Accounting. We are a team of professional experts ready to serve you and your company’s needs. Our services include accounting, taxation, business advisory, and other corporate support. Contact us today.