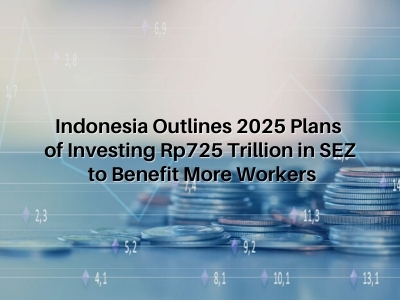 The Indonesian government has outlined 2025 plans of investing Rp725 trillion in Special Economic Zones (SEZ) to benefit more workers. Tax incentives would be simplified and expanded to develop more areas and secure over $50 billion in these zones.

According to the Deputy Coordination of Regional Development and Spatial Planning of the Coordinating Ministry for Economic Affairs, the state would simplify the existing rules on incentives forwarded to investors locating areas to build facilities, especially in particular zones.

Despite being Southeast Asia’s largest economy, some authorities in Indonesia expressed concerns about the country’s fallback across the regions of investments from companies amid the U.S.-China trade.

According to the ASEAN Briefing from Dezan Shira and Associates, most of the country’s industrial zones still lack infrastructures, which has led to the slow development of land and increased property expenses. Moreover, inconsistent power and utility supply restrict the most applicable rate of the zones.

Aside from the expense, it was mentioned that it is essential for the investors to acknowledge other special zones’ aspects. This includes assessing potentials in terms of quality of infrastructure, labour, and management, distance from a seaport.

Before outlining, companies in Indonesia shall register their profile to avail of tax facilities. This would recognize them as a business entity while managing an SEZ. The National Council determines the involvement of activities for Special Economic Zones.

That is why Indonesia’s state government has concluded investing Rp725 trillion SEZ to increase tax incentives and relief programs in promoting property investments in the region.

On January 6, the Indonesian President has signed the Government Regulation (PP) of 2020 under SEZs’ implementation. The orientation comprises the proposals, management, designation, and the evaluation of the amendment. SEZ development should increase trade exchange and accelerate the industry with 4.0, growth of less progressed regions, service, and tertiary sector.

In a press conference, Indonesia’s chief economic affairs minister said these special zones comprise the most high-grade facilities in Indonesia. A tax break based on the investment would be granted to the investors under the proposed protocols.

After implementing modifications by 2030, public officials hope to accommodate 726 trillion rupiahs ($51.31 billion) of investment into SEZs. Regulations to foreign workers are unchallenging, while rules for payment and outside transactions are more uncomplicated.

Meanwhile, these SEZs’ presence has concluded into an increment in Gross Regional Domestic Product and would continue to hike following the development investments. Foreign investors establish partnerships with Indonesian recruitment services to form businesses with the highest potentials in the country.